As if the World isn’t Crazy Enough, you can now buy a keg of Fireball Whisky 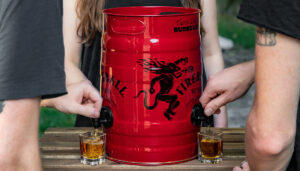 The “FireKeg” is a 5-liter keg of Fireball Whisky

Fireball, the infamous cinnamon whisky, will soon release a keg containing over 115 shots that can be accessed from three separate spouts, according to Delish. Apparently, one tap was just not enough.

The “FireKeg” was released earlier this week by Fireball in limited supply to stores around the United States. The keg is a bit over 5 liters and priced at $75, which honestly seems underpriced for the mass quantity. So fraternities everywhere can rejoice knowing they can afford cheap shots that will impress the ladies without having to cut into their hazing budget.

So, if you’ve been missing the Four Loko craze in its heyday, or maybe wishing you could get a 76 pack of beer again, the FireKeg is the replacement you’ve been looking for.

In all honesty, I can’t think of a more appropriate whisky to fill a keg with. However, I must absolutely insist everyone drinks this responsibly.

Fireball, a mixture of Canadian whisky, cinnamon flavoring and sweeteners, is produced by the Sazerac company and is 66 proof.

“Fireball fans always know how to ignite the party and keep it going. The limited-edition FireKeg will amp it up in a way only Fireball can,” said Rebecca Henry, VP of Marketing at Fireball, per Delish. “Fireball Friday, Tailgating, any occasion really–grab one while they’re hot! Just remember to ignite responsibly.”