Bartender Recognizes Arson Suspects Who Didn’t Tip, Turns Them in to Police 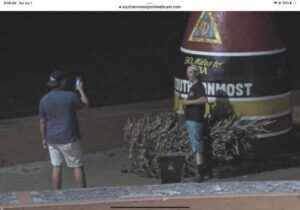 Pictured are the two arson suspects taking pictures by the tree prior to lighting it on fire. (Image via Key West Police Department).

Florida police have identified two arson suspects, all thanks to a bartender who recognized one of the men after serving him. The man didn’t leave a tip, making his credit card slip pretty easy to find.

The two suspects set fire to a Christmas tree around 3:30 a.m. in the early morning of Jan. 1 in front of the Southernmost Buoy, causing significant damage, according to The Drinks Business.

According to Key West police: “At about 3:30 a.m. on New Year’s Day, Key West Police and Key West Fire and Rescue were called to a reported fire at the Southernmost Point at the corner of South and Whitehead. They arrived to find the charred embers of the Christmas tree. The fire left a burned scar on the Southernmost Buoy that was about three feet wide and seven feet tall.” 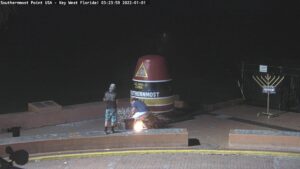 Image of the two suspects lighting the fire via Key West Police Department.

The police also said that “The two suspects were caught on multiple cameras. The footage, some of which quickly spread on social media, shows one man dragging the tree to the location. They hid when a car drove by, then took several pictures on their phones of each other in front of the tree and buoy. Then, while one man checked the surroundings, the other lit the tree, and a fire raged. One man took one last photo of the blazing tree before the two ran out of camera range.”

The moral of the story is always to tip your bartender, especially if you’re going to commit a crime later that night.