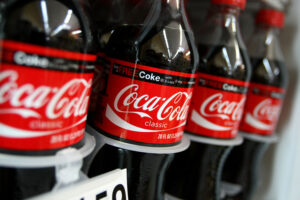 Coca-Cola products are displayed in a cooler at a convenience store April 16, 2008, in San Francisco, California. Coca-Cola is releasing Fresca Mixed, a boozy version of its Fresca soda. (Photo by Justin Sullivan/Getty Images)

Coca-Cola is releasing Fresca Mixed, a boozy version of its Fresca soda, in response to the growing popularity of canned cocktails. The business has teamed up with Corona maker Constellation Brands and will release Fresca Mixed, a spirit-based cocktail, later this year.

Fresca is the second non-alcoholic drink owned by Coke to be turned into a spiked version after the beverage giant introduced Topo Chico Hard Seltzer in 2020. The companies haven’t announced what flavors they’ll release, but they did say that Fresca Mixed will be “inspired by recipes developed by Fresca fans from all across the world.” Andy Cohen, host of a Bravo late-night talk show, drinks a “Frequila” on his program, which combines tequila and a Fresca.

Canned cocktail sales have exploded as drinkers look for convenience and new flavors beyond wine and beer. The beverage category grew 53% last year and is projected to grow another 29% over the next three years, according to data from IWSR Drinks Analysis. Constellation’s research says the that adult alternative beverages, which includes ready-to-drink cocktails, represent an $8 billion market and will continue to grow.

Coca-Cola has been around for over 123 years, and it’s not going anywhere- and with the latest introduction of Fresca Mixed, it’s clear that their marketing strategy is changing to keep up with the times. As consumers continue to shift away from canned cocktails in favor of more sophisticated alcoholic beverage options, we can expect even bigger changes coming out of this iconic company.