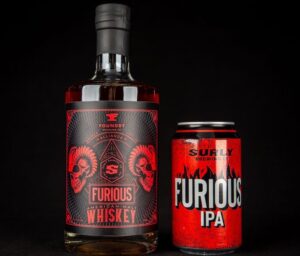 In a push to create a truly unique whiskey, Foundry Distilling Co. has teamed up with Surly Brewing Co. due to the brewery’s reputation for aggressively in-your-face IPA’s. Together they released Furious Whiskey on July 10th.

In a prepared statement, it is said that Surly brought the beer’s wort to Foundry Distilling Co., where it was fermented, distilled, and aged 24 months in new 30-gallon charred American Oak barrels to produce the whiskey. In total, Foundry has made 1,000 cases in an extremely limited run.

Created from @surlybrewing‘s Furious IPA, this whiskey will be release this summer – a perfect time to experience the earthy, citrus flavors.

“This has been a fantastic collaboration with our Midwestern neighbor, Surly Brewing Company,” said Scott Bush, owner of Foundry Distilling Company. “We know whiskey enthusiasts will love this take on their iconic, hoppy, and aggressive Furious IPA.”

This will not be the last we will see of a Foundry Distilling Co. and Surly Brewing Co. collaboration. They two will also be working together on another special whiskey, based on the brewery’s Axe Man IPA, that is scheduled to be released sometime during the 3rd quarter of 2022.