From Milk to Whiskey, Ranking the Drinks People Around the World Leave Out for Santa Claus 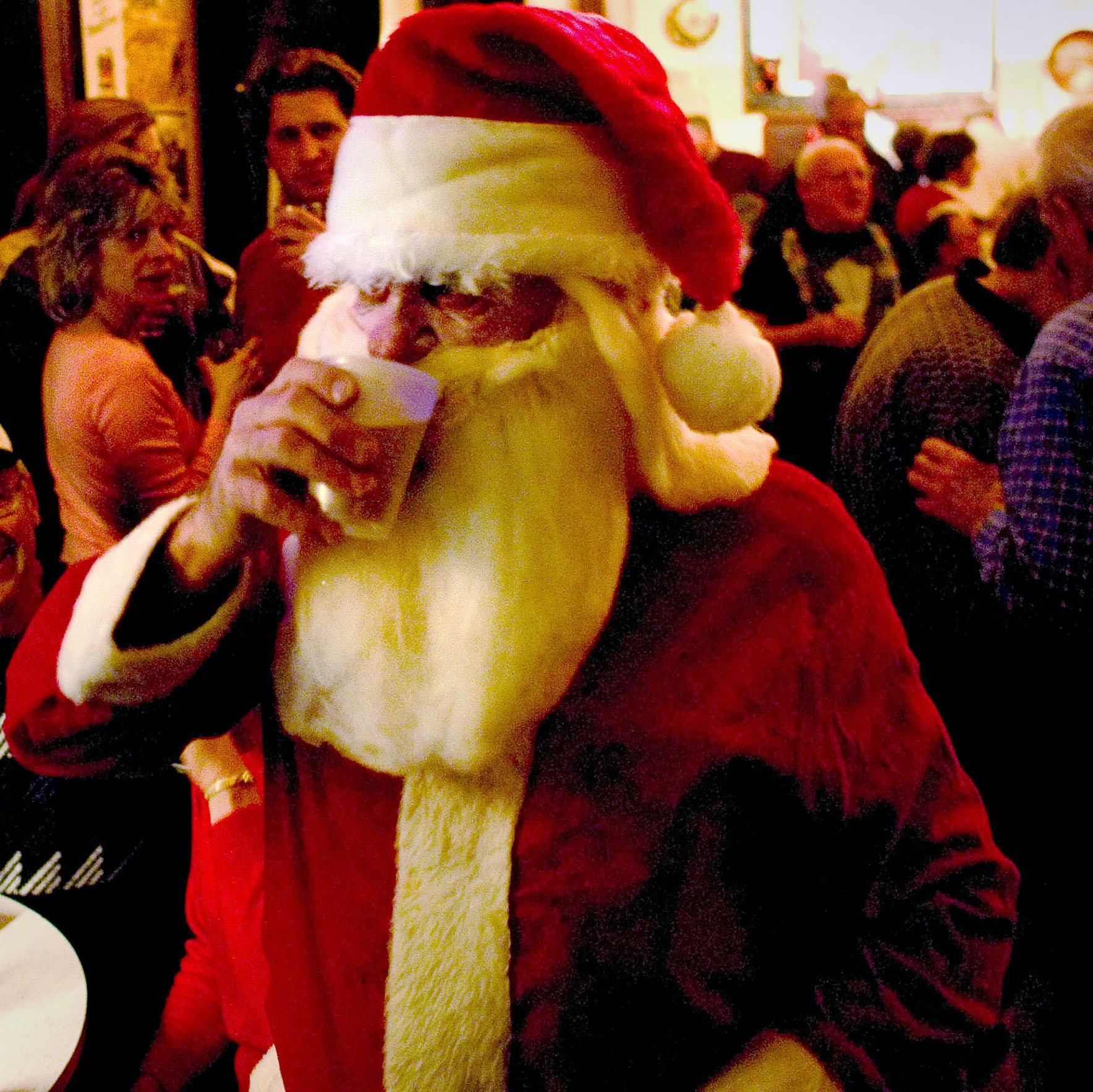 Santa Claus consumes a lot of liquids on Christmas. We decided to rank the most prominent drinks people around the world leave out for Father Christmas. (Photo: Darren Hauck/Getty Images)

In the U.S., Christmas traditions are fairly cut and dry. They vary a bit from family to family, but there’s a bare-bones structure, and part of that structure, for a great many celebrating families, is leaving milk and cookies out for Santa Claus before heading to bed. But outside of the U.S., Santa-sustenance traditions have a much wider range. In light of that fact, we’ve decided to rank seven drinks commonly left out for the big man on his big night.

It pains us to put milk last on the list, as it’s an American classic. But hear us out on this one. Cookbook author CiCi Williamson, who spent 26 years as a food safety expert for the USDA Meat and Poultry Hotline, made a very convincing point in a 2017 NPR article: “Milk left out all night could make Santa ill from a foodborne illness. Milk shouldn’t be left out more than two hours. After that, bacteria double in numbers every 20 minutes.”

Sure, it’s generally cold outside on Christmas Eve, but all that means is that families crank up the heat inside — worsening the problem. Unless you leave your milk outdoors, milk could have adverse effects on Santa on the night where he can ill (no pun intended) afford it.

5. Water for the Reindeer (Argentina, Belgium)

Helping Santa’s reindeer refresh is a very nice move. After all, they’re doing the brunt of the work here.

It feels a little bit rude to leave nothing for Santa, considering he’s bringing you gifts, but on the other hand, considering the millions of families leaving him food and drink, perhaps he can schedule his route tactfully to stop in Argentina and Belgium when he needs a break from the food and alcohol. Speaking of the latter…

We have to respect giving Santa some beer, but it’s hard to know where to rank this one without knowing the type of beer. In Ireland, the tradition is Guinness, which is a solid choice; a stout is best enjoyed during the winter months, but at the same time, it’s a heavier beer, and a pint of Guinness from every house in Ireland is… a lot. Then again, we don’t have all of the facts about Santa Claus. Maybe his stomach capacity is otherworldly.

Australia, however, is on the other side of the world, making Christmas summertime. The average highs in Adelaide, Canberra and Sydney during December are 79 degrees F, with temperatures breaching 100 at times. So a lighter beer makes sense down under. Cracking open a cold one on a hot evening in Australia is probably a lovely change of pace for Santa after braving the cold in other parts of the world.

Instead of Santa Claus, Norway has Nisse, which live in attics and are small creatures with large white beards, similar to garden gnomes in appearance, so sly they are never seen. They are said to be quite mischievous and will wreak havoc if families don’t leave them beer and a bowl of porridge on Christmas Eve.

Beer is the most popular alcoholic option, according to Britain-based market research company YouGov, whose poll showed that 38% of alcohol left out for Santa is beer.

Sherry, accompanied by a mince pie, is commonly left out in the U.K. The idea is to “brace Father Christmas for the chill,” British diplomat Andrew Overton told NPR. If Santa’s passing through the U.K. in the evening, he surely appreciates the sherry, as it is often very sweet, perfect for a dessert wine. Of

Sherry is such a key Christmas tradition in England that the Wine and Spirits Trade Association launched a “Save Santa’s Sherry” campaign in 2016, sparked by a decline in Sherry sales. According to the YouGov poll, Sherry is tied for second on the list of the most common alcoholic beverages left out for Santa, making up 23% of the total.

This is the best option. What would you want to drink in the middle of an overnight shift during which you have to visit upwards of a billion homes? The ultimate pick-me-up, a coffee. The only concern we have is the coffee getting lukewarm or cold if your home is a later stop on Santa’s route. On the other hand, once you’ve visited a few hundred million homes in a night and aren’t yet halfway finished, we bet coffee is pretty much coffee at that point.

It’s hard to beat coffee, but whiskey wins out for one reason: The wife is always right. And as Santa Claus himself said in an interview with Independent.ie in 2016, Mrs. Claus has whiskey ready for Santa to enjoy upon his return.

“I’ve been all over the world with the trip, delivering to all the good children, but now it’s over and at this stage, I can just sit back and put my feet up, as Mrs Claus comes in with a nice little snack and a little drop of whiskey,” Santa said in the story. Santa also confirmed that he loves chocolate chip cookies and gave his thanks for the mince pies and slices of Christmas cake.

Mrs. Claus isn’t the only one who gives whiskey to Santa. Although it doesn’t appear to be the leading offering in any countries, 23% of alcoholic drinks left out on Christmas Eve are whiskey, according to YouGov’s poll.

Should We Be Worried About Santa Operating a Sleigh After All of That Booze?

Considering the number of houses and different types of booze Santa is treated to, operating that sleigh seems pretty risky. Santa is clearly superhuman and surely has an incredible tolerance. He does appear to be fallible, though; in January 2016, a white-bearded man legally named Santa Claus was arrested for a DUI in Idaho after being pulled over while driving a car on the wrong side of the road. Perhaps his sleigh was in the shop. He told authorities at the time that he was not from the area and was unfamiliar with the streets. We did a fact check and were able to confirm that Idaho is not near the North Pole.

So maybe we should worry about Santa flying the sleigh with all that liquor in his system. Then again, maybe the elves have cooked up a wicked autopilot system, or maybe the reindeer know the route without Santa steering. Really, who knows?

What does your family leave out for Santa Claus? Is it something outside of this list? Leave a comment or hit us up on social media to let us know!