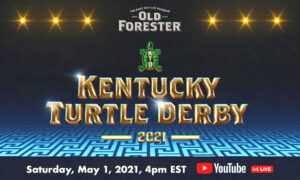 Known as the fastest two minutes in sports, the Kentucky Derby is set to fly by May 1st. One thing that won’t fly by, though- the Kentucky Turtle Derby hosted by Old Forester Whiskey.

“Is it as flashy as the real Kentucky Derby? Yes. While this race is open to turtles of any age, nationality, or music taste, only the best of the best make it this far.” Old Forester says of the race.

The whiskey brand is hosting the annual turtle race on their youtube channel Beginning at 4 PM EST. Old Forester revived the Turtle Derby in 2020. However, it originally took place back in 1945 when the US had temporarily banned horse racing due to World War II. During the pandemic, Old Forester decided it was the perfect time to bring the race back when the Kentucky Derby was delayed due to Covid.

Moe Lasses (30:1) may be the dark horse in this race, having won both the Arugula Invitational and the Pond Scum Classic in back-to-back years. Turtles close to Moe claim it was a move proposed by his agent to better appeal to mass fans. #kentuckyturtlederby pic.twitter.com/aLthTlzKHG

How To Enjoy The Slowest Two Minutes in Sports? First, Whiskey.

Old Forester, to be exact. Traditionally enjoyed in a mint julep cocktail on Derby day, but neat or on the rocks is just fine as well.

Also, don’t forget to grab your tickets to the event from Eventbrite. There will be “bidding” at the race, where viewers can place bets on their choice of turtle for the chance to win Old Forester Kentucky Turtle Derby gear, like hats and t-shirts. However, only ticket holders are allowed to join the betting, so be sure to purchase by the end of Friday, April 30th.

Lastly, everyone is encouraged to tune in later that afternoon on NBC for the official Kentucky Derby presented by Woodford Reserve, starting at 3:57 pm PDT.