‘The time to act is now’: Kentucky Distillers’ Association Calls for Reduction of ‘Exorbitant’ Bourbon Taxes 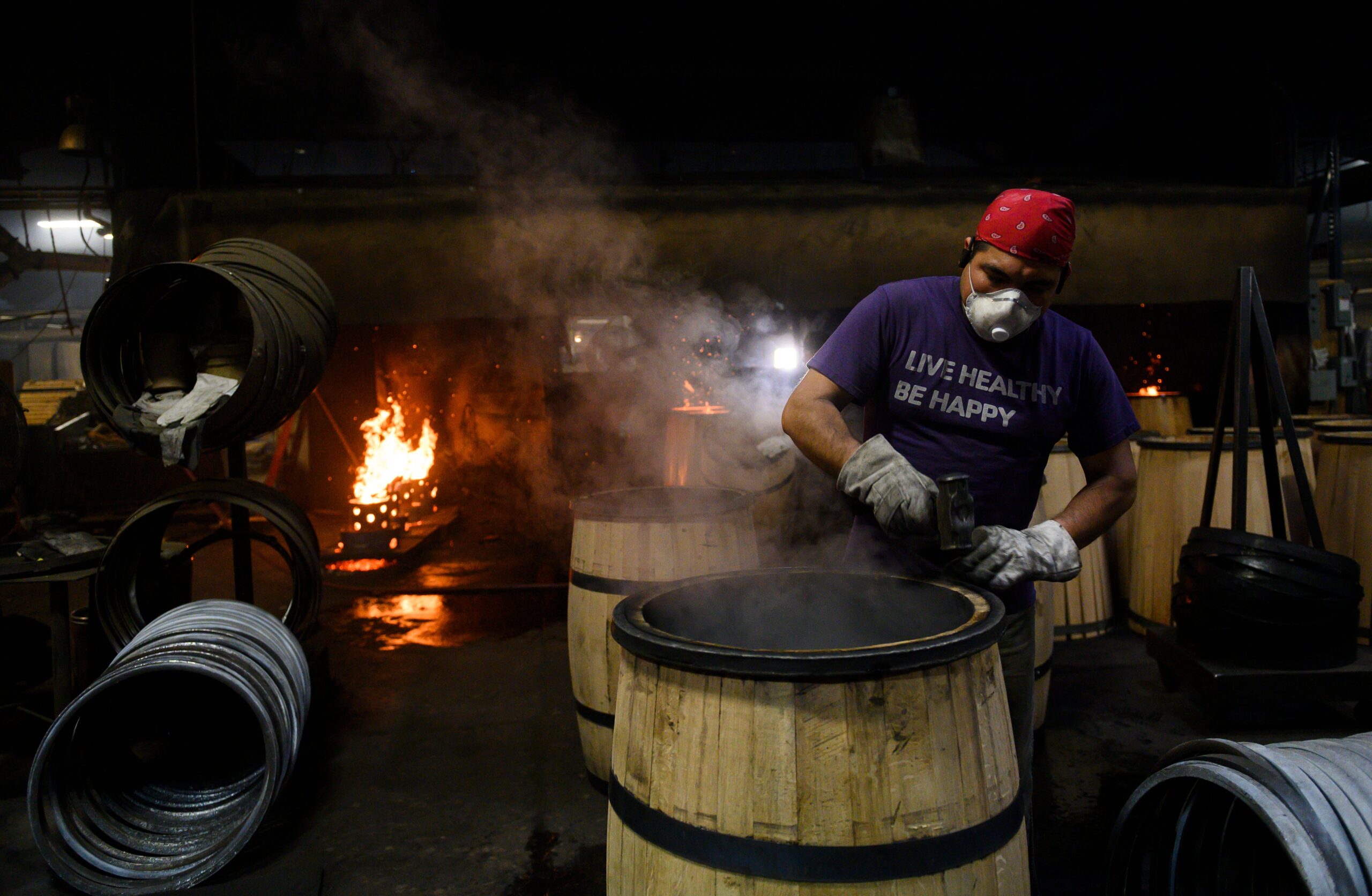 An employee hammers a metal ring onto a newly charred barrel for bourbon use April 12, 2019, at Kelvin Cooperage in Louisville, Kentucky. The Kentucky Distillers’ Association is protesting taxes on bourbon. (PHOTO: ANDREW CABALLERO-REYNOLDS/AFP via Getty Images)

The Bourbon industry, which is almost entirely in Kentucky, is seeing massive success; Kentucky has more than 10 million bourbon barrels — the most in the modern era — currently aging as a result of high demand for the spirit. The Kentucky Distillers’ Association is pleased with the upward trend but has a major concern: taxation.

Eric Gregory, president of the Kentucky Distillers’ Association, raised the issue in a statement reported on by the Associated Press, positing that the bourbon industry was managing to thrive despite the COVID-19 pandemic, “exorbitant taxes and ongoing trade wars.”

Kentucky exports bourbon to European Union and the United Kingdom, and those exports have taken a hit due to leftover tariff disputes from the Trump administration; the EU imposed a 25% tariff on American whiskey and other products in response to then-President Donald Trump’s tariff impositions on European steel and aluminum. American whiskey exports have declined by 37% to the EU and 53% to the UK as a result, according to the Distilled Spirits Council of the United States, per AP.

The Kentucky distillers’ group has joined a coalition of 50 U.S. alcohol-related trade associations in pressing President Joe Biden’s administration to secure the suspension of tariffs on American whiskey.

the distillers’ group has joined 50 U.S. alcohol-related trade associations in a mission to convince President Joe Biden’s administration to secure suspension of tariffs on American whiskey.

“Our industry is collateral damage in trade disputes that have nothing to do with bourbon,” Gregory said.

The taxation worries don’t end with international shipping. Kentucky distillers seek relief from barrel taxes on aging whiskey. Distillers will pay $33 million in aging barrel taxes this year, a cost that distilleries in other states don’t pay, which puts Kentucky producers at a disadvantage, the distillers’ association said.

Most of the barrel taxes go to paying for local school districts. The distillers’ association is proposing a plan that would have distillers continue to pay barrel taxes to keep up revenue for the schools, but the state would refund distillers money from its General Fund.

“The bourbon industry is investing more than $5 billion in this state to increase production, build innovative tourism centers and create thousands of new jobs,” Gregory said. “But punitive barrel taxes are punishing this growth and harming our chances to land new distilleries.