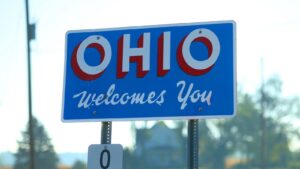 Ohio has added The Columbus Distillery Trail to its list of state attractions.

In case you missed it Ohio just announced the launch of its very own Columbus Distillery Trail.

Kentucky’s Bourbon Trail is one of the most popular tourist destinations in the state, and it’s no surprise that other states are looking to replicate its success. However, one of the most notable things about Kentucky is its admirable history of bourbon and status as home to some of the most famous whiskeys in the world. Ohio, on the other hand, while undoubtedly home to many great distilleries, let’s be real here, is not home to any that are world-renowned.

There are seven distilleries on the list, including Watershed and Middle West, and they also have fun perks such as this: When visitors make four purchases at any of the stops, they will receive a personalized Simple Times mixer as a thank you. Those who complete all seven tours will get a “The Proof is in the Proof” Columbus Distillery Trail T-shirt.

If imitation is the sincerest form of flattery, then Kentucky must be blushing from all the compliments Ohio (and Tennessee and Texas for that matter) have been sending its way.