‘A Piece of Paskenta Is in Each Bottle’: California’s 1st Tribal-Owned Distillery Focuses on Tradition With an Eye on the Future 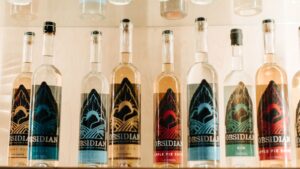 Paskenta Distillery, which produces Obsidian Spirits, sits inside a casino in the small Northern California town of Corning. The distillery is unassuming, but the spirits, people and establishment are breaking boundaries across California.

As I approach the tasting room inside Rolling Hills Casino & Resort, owned by the Paskenta Band of Nomlaki Indians, I’m greeted by the most beautiful copper, state-of-the-art stills I’ve ever seen, including the tallest vodka column on the west coast.

Andrew Alejandre, tribal chairman next to the obsidian stone that the spirits are filtered over before bottling.

Paskenta Distillery became the first tribal-owned distillery in California after the 2018 overturning of an 1834 federal law that made it illegal to set up a distillery on tribal land. The overturning of the law has been impactful for Native American tribes, allowing them to not only survive but thrive, and Paskenta is distilling its spirits in a unique way representing that.

Obsidian, or “sacred glass from the sky,” as some Native American tribes call it, plays a major role in Californian history, especially in the Nomlaki Tribe. Obsidian is a precious volcanic glass traded near and far by Native Americans. California Native Americans have been mining and working obsidian for at least 13,000 years.

That obsidian still plays economic, artistic and religious roles in the lives of today’s Californians testifies to the qualities the Indians discovered long ago. The cultural importance of obsidian is evidenced by the fact that several tribal groups created myths specifically about obsidian. Not only do the myths illustrate tribal religious beliefs, but they help to trace geological and archaeological histories, as well. 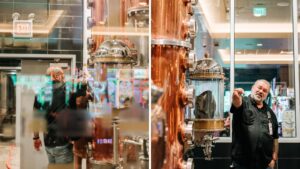 “Part of this subsidy in stone, we used it for survival and to provide for our people,” Tribal Chairman Andrew Alejandra said. “And that’s pretty much what we’re doing today with this business.”

The obsidian that is used in the distilling process was gifted to the distillery by one of the tribe’s elders.

“The Nomlaki Indians used [obsidian] for hunting, survival and protection,” Alejandra said. “So now every time a spirit flows over the stone, a piece of Paskenta is in each bottle.”

After touring the production facility, Couchout accompanied me to the tasting room, where I was able to try all of the distillery’s available expressions. Paskenta produces rum, tequila, vodka, and apple pie “shine” (moonshine), all sold at the distillery’s gift shop. 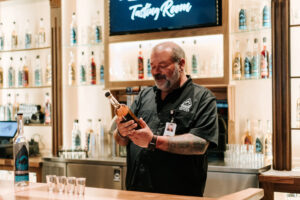 Couchout is pictured in the distillery’s tasting room.

While each of the spirits I tasted with Couchout was phenomenal, the spiced rum was out-of-this-world good, and that’s coming from someone who does not typically drink rum.

Paskenta will begin whiskey production later this month. Currently, the Obsidian spirits brand is exclusively sold in and to the Casino; however, the team is excited by the growth it has witnessed and looks forward to expanding its reach.

“We’re getting excited about getting some barrels,” said, Steve Neely, the casino’s general manager. “We’re looking for agave-based stuff; mezcal is a big seller. Then, the other advantage we have is we’re a native American tribe, [so] we have the ability to sell to other native American tribes. We can actually pass a tremendous amount of savings to them in the form of state taxes.” 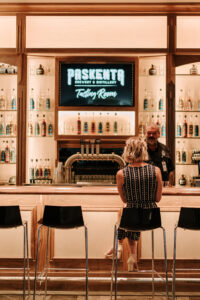 Paskenta Distillery, which started as a way to create revenue for the tribe and jobs for its tribal members, has turned into a successful business venture that’s garnered national attention with nods from publications like Bevnet and Native Business. Obsidian Spirits is quickly becoming a staple in California’s spirits scene due to its focus on quality, community and tradition.

If you’re ever in Northern California, be sure to stop by Corning and check out Paskenta Distillery for yourself.