Pendleton Whisky is donating $100,000 to the Bob Woodruff Foundation with their newest limited edition whisky; We’ve Got Your Six.

As a token of appreciation for military veterans, the bottle is a symbol of gratitude. The title inspired by the military term, “we’ve got your back,” which represents the company’s “enduring commitment that our service members and veterans make to each other and our country.” 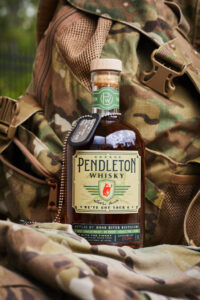 Pendleton and the Bob Woodruff Foundation have developed the limited edition bottle together with Pendleton pledging $100,000 to the organization to help fund the nonprofits aimed at helping veterans across the United States. In addition, a portion of the proceeds from Pendleton’s limited edition bottle will also benefit the Bob Woodruff Foundation.

The whisky will be 40% Alc./Vol. (80 proof), and found at most major retailers that sell alcohol and suggested retail around $40.