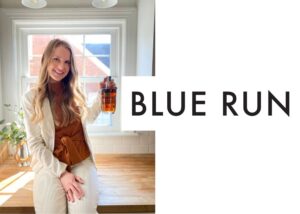 Gammon comes from Campari, where she worked on Wild Turkey, in particular the Master’s Keep, Rare Breed, Russell’s Reserve and Longbranch lines. This new role with Blue Run will allow Gammon to explore her creativity by preparing the company’s private barrel selection program and serving as a distillation apprentice to Blue Run Liquid Advisor and Bourbon Hall of Fame inductee Jim Rutledge. She also will work with the Blue Run team to grow its long-term whiskey portfolio.

Gammon has a background and a story in the industry that speaks for itself, and one of my favorite stories she shared during our time together was when she talked about creating Russell’s Reserve 13-Year-Old Bourbon, which was named Best American Whiskey of 2021 by Fred Minnick. The best part of the story? She was pregnant and didn’t sample a single barrel.

“I do remember feeling intimidated when I found out I was pregnant. I thought, how am I going to create? I hoped that my nose would be sufficient and do crazy bloodhound work since normally, I would taste during the process.” Gammon recalled.

“Fortunately, it was fine. I found that with just my nose, I was able to do 85% of what I normally do. So, I went through my normal process of sampling barrels- the ear, nose and then blending. Sniffing my way through until I found that range. I didn’t taste it till after my son was born, and it was the cherry on top that it won the award.”

As for Bue Run founder Mike Montgomery, he says that Blue Run had its sights set on Gammon from an early stage in starting Blue Run.

“She can accomplish much more at a startup like Blue Run than at a large, established brand. We’re still learning and growing. The sky’s the limit for what she can accomplish. It just depends on what she chooses to focus on.”

Shaylyn revealed that she was inspired to go into the spirits world during her time in college as a food science major at the University of Kentucky.

“Typically, if you’re a food science major,  you either go into quality or you go into research and development. And R&D was always the more coveted world because it was more dynamic, and I knew that was more fitting for my personality,” Gammon said.

“I went to work in R&D in the non-alcohol space, specifically baby food and MREs, military ready-to-eat meals. Later, when I had the opportunity to jump over to Campari, I felt like it was just kind of everything that I have been working towards coming together because it was alcohol; it was my chance to get into the industry. But I got super lucky that [Blue Run] took a chance on me.”

As for Shaylyn’s biggest career success so far? She says hanging out with Matthew McConaughey and his wife, Camila Alves.

“Obviously, making the jump over to Blue Run feels like validation that I’ve been doing something right,” she said. “Previous to that, I developed the whiskey for Matthew McConaughey. It took about two years of pretty hardcore research and development. To see that turn out was really cool. I also got to go to one of the premieres in Austin and hang out with him and his wife.”

Gammon is a powerhouse in the industry, and her story should be told more often. She has faced challenges and has achieved immense success regardless. If her time with Blue Run is anything like her time with Wild Turkey, there will be a lot to look forward to in future releases.