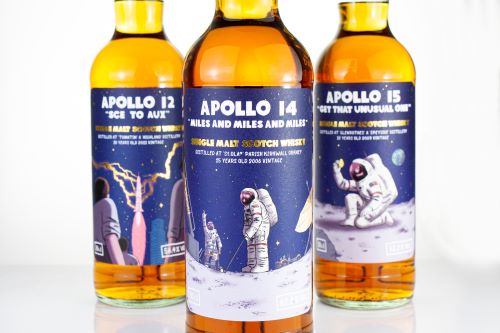 Whisky merchant and bottler The Whisky Barrel is releasing a three-bottle series of single cask scotch whiskies to celebrate the Apollo space missions. Each bottle will have matured in a first fill sherry hogshead cask and will represent an event that took place on the Apollo missions. Each event will be depicted on its bottle’s label, illustrated by London artist Jamie Coe.

The bottles release Sept. 30 and will be sold in Scotland and on TheWhiskyBarrel.com for a suggested retail price of £90/€88/$100. More on each bottle:

The Apollo 12 bottles were selected from a first fill Oloroso sherry hogshead cask distilled at Tomatin distillery. The Whisky Barrel will bottle 271 of these at cask strength 56.4% ABV. This bottle remembers when the Saturn V rocket was struck by lightning twice shortly after its liftoff. The lightning affected the telemetry measurements on the spacecraft, putting the mission in jeopardy. Engineer John Aaron in Mission Control suggested the pilot switch the Signal Conditioning Electronic to auxiliary, avoiding potential disaster.

The Apollo 14 are bottled from a first fill Pedro Ximénez sherry hogshead cask at Orcadian distillery. It is a batch of 316 bottles at cask strength 61.8% ABV.

The name and illustration are a nod to the time Commander Alan Shepard struck two golf balls while on the moon. The balls still remain there to this day. Shepard claimed his second shot went “miles and miles and miles.”

Apollo 15 ‘Get That Unusual one’

These bottles were selected from a first fill Oloroso sherry hogshead cask distilled at the Speyside distillery. The batch comprises 312 bottles at cask strength 61.1% ABV. “Get that unusual one” was said by astronaut Davis Scott to fellow astronaut James Irwin about a sample of moon rock the two were retrieving. The sample came to be known as “The Genesis Rock.”