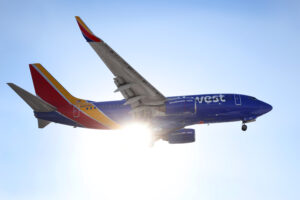 Southwest Airlines is looking to bring back booze on flights after banning alcohol in March 2020 following a slew of misbehaving passengers. According to CNBC, flight attendants flag passenger intoxication as a significant factor in the particularly bad behavior in the last year.

“We’re looking at that here sometime late in the first quarter maybe early in the second quarter,” Southwest COO Mike Van de Ven said on the company’s quarterly call Thursday. The airline was originally planning to bring back booze previously but postponed it again due to the Omicron variant.

“About 70% of the 5,981 reports of unruly passenger behavior the Federal Aviation Administration received last year involved disputes over compliance with the mask mandate,” CNBC said. Because of this, American Airlines also limited its onboard services after the Association of Flight Attendants union put pressure on the airline. The union argued not providing alcohol during flights would decrease the number of times passengers have their masks off.

“Together with APFA, we have decided to temporarily modify some onboard service to limit customer touchpoints,” American said in a statement. “As we have throughout the pandemic, we will continue to assess ways to thoughtfully return the onboard dining services customers are asking for while keeping safety front and center.”

So, while it looks like there is a light at the end of the boozeless tunnel, it may still be a while before you can order an old-fashioned mid-flight.

United Airlines, meanwhile, returned booze to its flight in November after a year of liquorless flights.

In December, Massachusetts Sen. Ed Markey called for a booze ban on airplanes after a spree of passengers angry over mask mandates causing trouble on planes.

“Unfortunately, passions are intensifying rather than abating, and more and more people just feel that it’s their constitutional right not to have to wear a mask on a plane,” Markey said at the time. “If that opposition is then fueled by alcohol on that plane, it creates a dangerous situation, not just for the flight attendants, but for the passengers on that plane as well.”