To celebrate the 400th anniversary of the first Thanksgiving, Tamworth Distilling released a new whiskey that is sure to be a conversation starter around the holiday table: Bird of Courage. 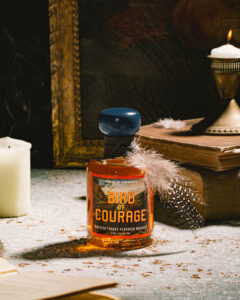 According to Tamworth, every component is distilled fresh from the oven to acquire the genuine essence of Thanksgiving. As a result, you’ll get a cornucopia of festive fall scents that bring out the sophisticated nuances in this five-year Bourbon. Sweet potato and squash combine with the buttery heart of flint cornbread to give this whiskey the authentic flavor of a Thanksgiving.

“For in truth, the turkey is in comparison a much more respectable bird, and withal a true original Native of America… He is besides, though a little vain & silly, a Bird of Courage.” – Benjamin Franklin 1784

If this crazy flavor sounds just good enough to try, preorder a bottle here. But be warned, it’s only available by pick up from the distillery itself.