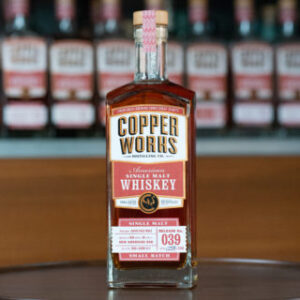 Copperworks Distilling and Mainstem Malt collaborated on a new whiskey release, which is Salmon-Safe. It marked a watershed moment for the country. Copperworks’ release of Copperworks 039 is the first whiskey made with Salmon-Safe ingredients and becomes America’s first salmon-safe whiskey. This partnership between Copperworks and Mainstem Malt aims to protect Washington’s rivers and watersheds by sourcing sugar from organic cane grown in Oregon instead of GMO corn syrup from out-of-state sources.

Salmon-Safe is a nonprofit organization founded by Pacific Rivers, a river protection group. Salmon-Safe’s peer-reviewed certification criteria are focused on minimizing agricultural runoff effects in watersheds, and Copperworks Distilling has been certified by the organization for creating sustainable procedures for the surrounding rivers and wildlife.

“For Salmon-Safe, environmentally innovative industry partners like Copperworks and Mainstem are essential to inspire a market shift towards water quality protection and habitat conservation on Northwest farms,” said Dan Kent, Salmon-Safe’s Executive Director, in a news release. “We’ve seen in the wine and craft beer sector how Salmon-Safe messaging can be a powerful message in the marketplace.”

“The Genie malt in this whiskey is really a place-based experiment,” said Mainstem Malt founder Phil Neumann. “Not only do we get to taste the ‘terroir’ of dry-farmed grain from Walla Walla, we know that this grain comes from a farm that intentionally protects the land and water downstream through its commitment to Salmon-Safe farming practices. I’ll drink to that!”

Release 039 is a limited-edition bottle at just 2,103 bottles. The distillery intends to continue experimenting with this single variety grain in order for drinkers to discover how the malt’s flavor varies depending on weather and other circumstances from year to year.