What is Baijiu Style Whiskey? Buffalo Trace Is Glad You Asked

Buffalo Trace announced the limited release of their new baijiu style whiskey as the newest addition to their experimental style spirits.

The distillery currently has 30,000 experimental barrels of whiskey aging in its warehouses, according to their website. Buffalo Trace also says that every barrel has a unique characteristic and changes in the mash bill due to the types of wood, barrel toasts, and more. Occasionally, an experimental whiskey is bottled and sold on a limited basis; the Baijiu experiment made the cut. 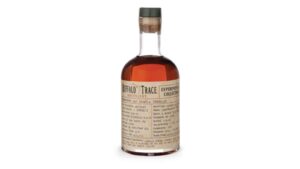 While the whiskey is similar to bourbon, baijiu is distilled from long-grain rice and often contains Chinese medicinal herbs.  The rice aroma is typically smooth and mild, similar in taste to sake. An unexpected twist on a whiskey, but that is the point.

This is the  24th installment in Buffalo Trace’s experimental line. The first being released in 2006, it joins thousands of other recipes and barrel treatments that are also tested and refined into a unique experience for tasters.

The baijiu style whiskey is sold in 750 ml bottles, with a suggested retail price of $46.99. The experimental whiskey can be found in select markets in May 2021. Stay up to date on the newest release by visiting the Buffalo Trace site.