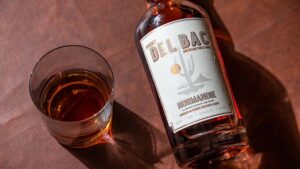 Del Bac’s latest whiskey is named Normandie (using the French spelling) not as an homage to D-Day but actually to the cheese and fruit that come from that region of France. The coastal area is known for its creamy cheeses, seafood and fruit such as apples and pears. Whiskey Del Bac Normandie is the second release in a series of three limited annual whiskeys that will be released to celebrate European regions.

“Much like the response from the original sherry cask-finished Distiller’s Cut that then became Frontera, fans of Summer Distiller’s Cut 2018 were so enthusiastic about the Calvados finish we had to bring it back for the annual release of Normandie,” Amanda Paul, Whiskey Del Bac co-founder, said, according to Craft Spirits Magazine.

This American single malt whiskey, which scored 93 from Wine Enthusiast in 2021, opens with bright stone fruits on the nose and is balanced with a sweet caramel and oak finish, according to the brand.

As for the production, calvados is a traditional French apple brandy with an aroma that many compare to honey. This small-batch bottling of whiskey from Calvados barrels totals just 900 bottles and will be available in select national markets.

This limited edition whiskey is 92 proof and 46% ABV and has a suggested retail price of $90 a bottle.