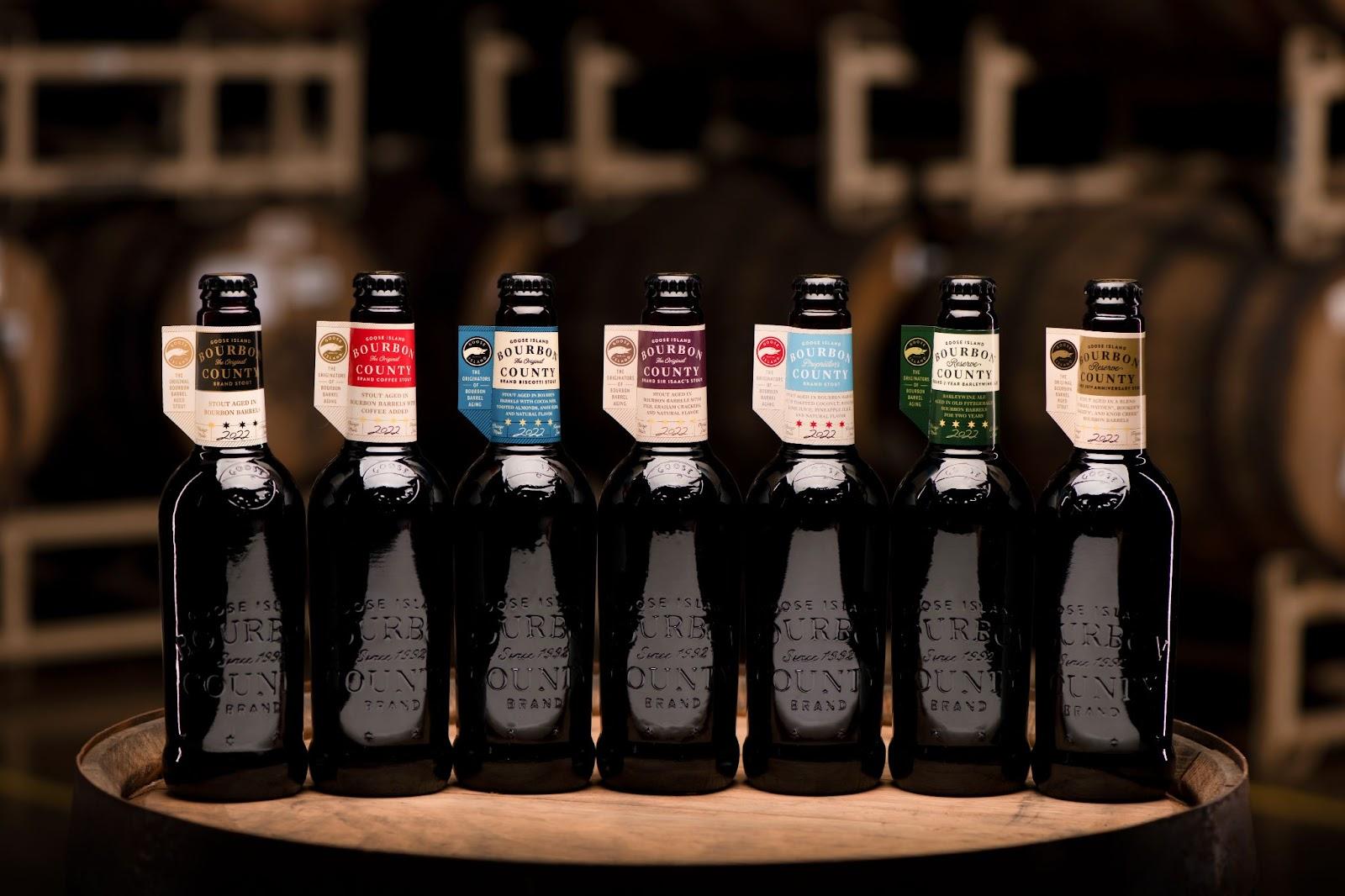 “This year we are looking back at 30 years of Bourbon County Stout, while also continuing to make our releases new and exciting for ourselves, and the fans of this amazing family of beers,” said Mike Siegel, Goose Island’s senior innovation manager. “This 30th Anniversary pays tribute to the connection to the Beam family, and the origins of BCS with Greg and Booker Noe.

“Coffee BCS, our original variant, returns, and once again was made with our longest partner in this amazing series of beers, Intelligentsia Coffee Roasters. Our 2 Year Barleywine Reserve brings back an old favorite in an amazingly new way with barrels from a legendary bourbon “Old Fitz”, and for the first time, concepts for variants were created by people outside of the operations side of the brewery, Bourbon County lovers in our Goose family that usually don’t get involved with creating beer, but won us over with their great ideas. We think about Bourbon County Stout every day of the year, and I hope this year’s releases show that.” 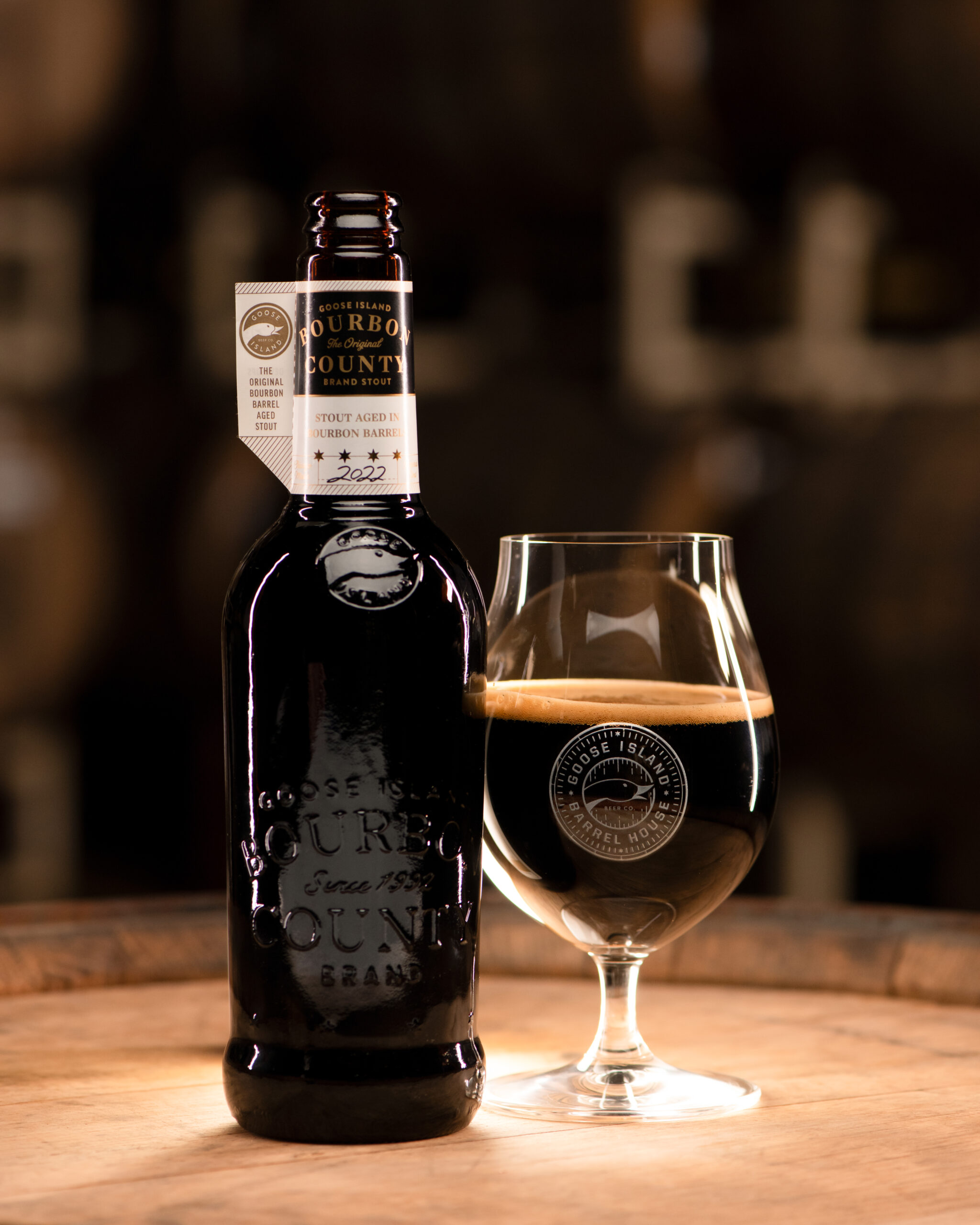 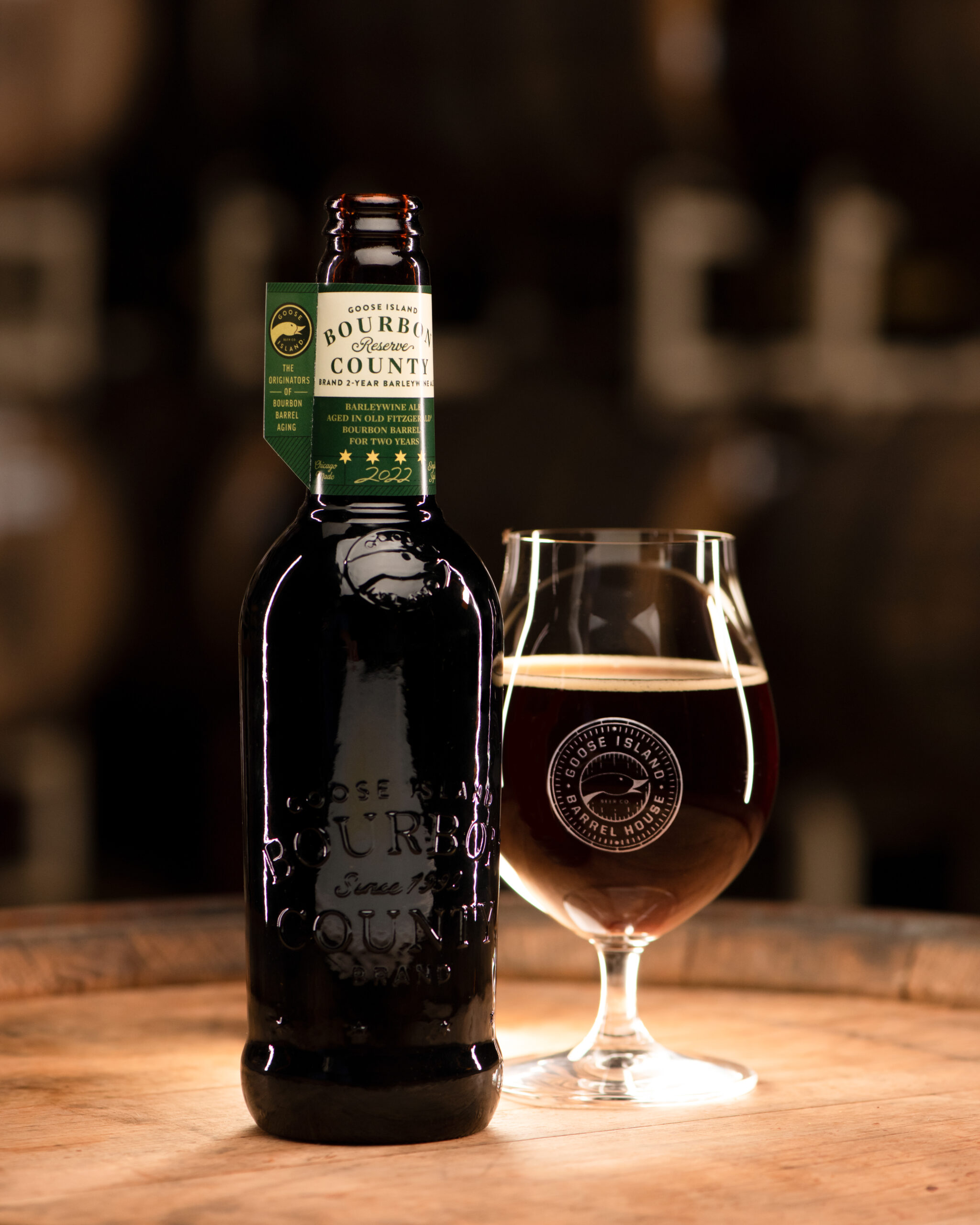 For Barleywine Reserve, Goose Island acquired three sets of barrels of differing ages from Old Fitzgerald’s Bottled-In-Bond Decanter series. “This Reserve offers us a rare opportunity to highlight the distinct characteristics of our rich Barleywine aged in 14-year, 16-year and 17-year-old barrels of an amazing bourbon pedigree,” Goose Island wrote in its description of this beer. This is the first barleywine to enter a Bourbon County lineup since 2018. Tasting notes from Goose Island include toffee, cherry, vanilla, fig and almond. Goose Island has thus far only announced the ABV levels for three of the seven beers in the Bourbon County lineup, and Barleywine has the lead, with a staggering 17% mark. 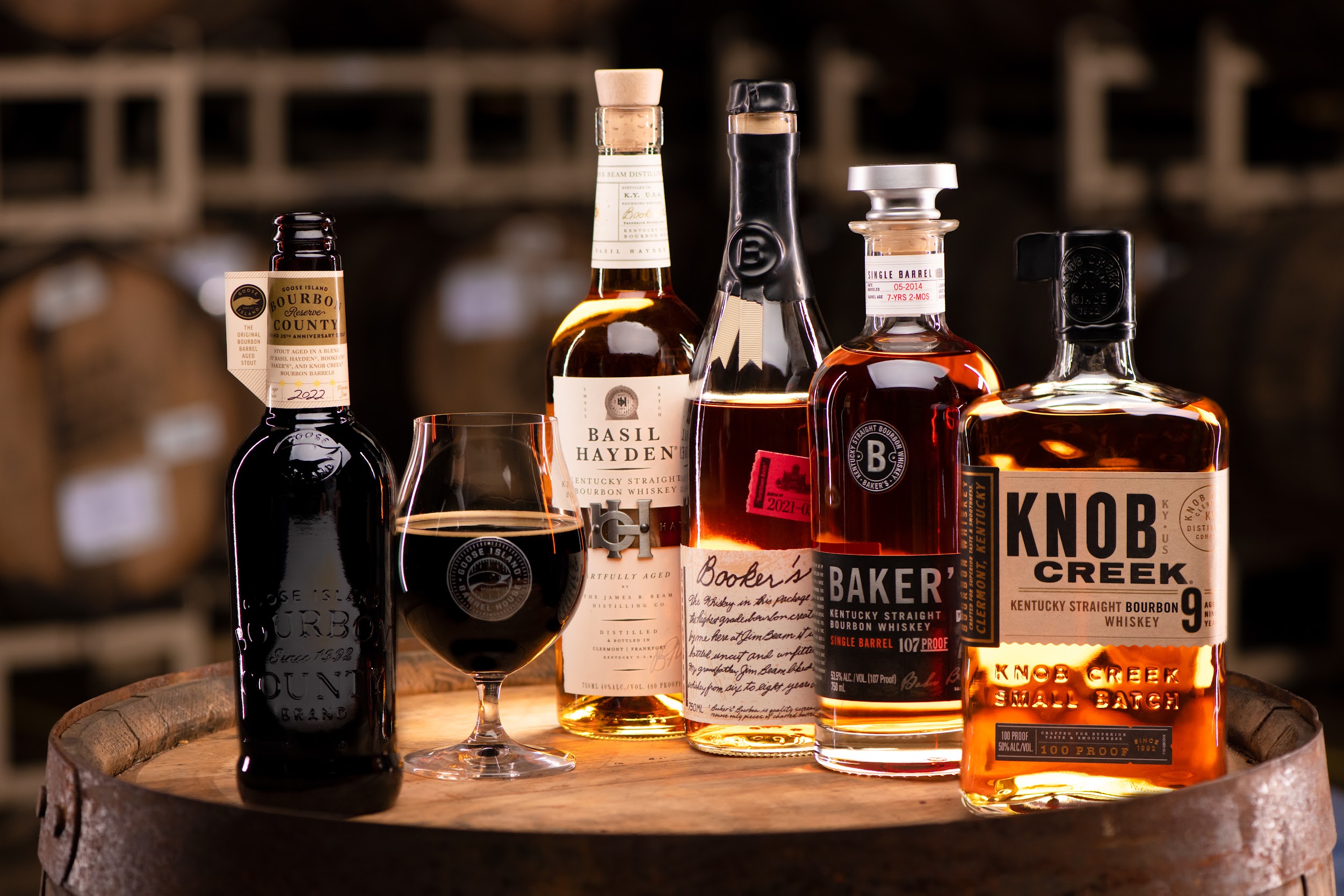 Goose Island says this 30th Anniversary stout pays homage to the “serendipitous union” between Hall and Noe. For that reason, this stout is aged in Jim Beam barrels from its Small Batch Bourbon Collection — which, fittingly, debuted 30 years ago. Goose Island lists notes of dark chocolate, vanilla, cherry and almond for this beer. 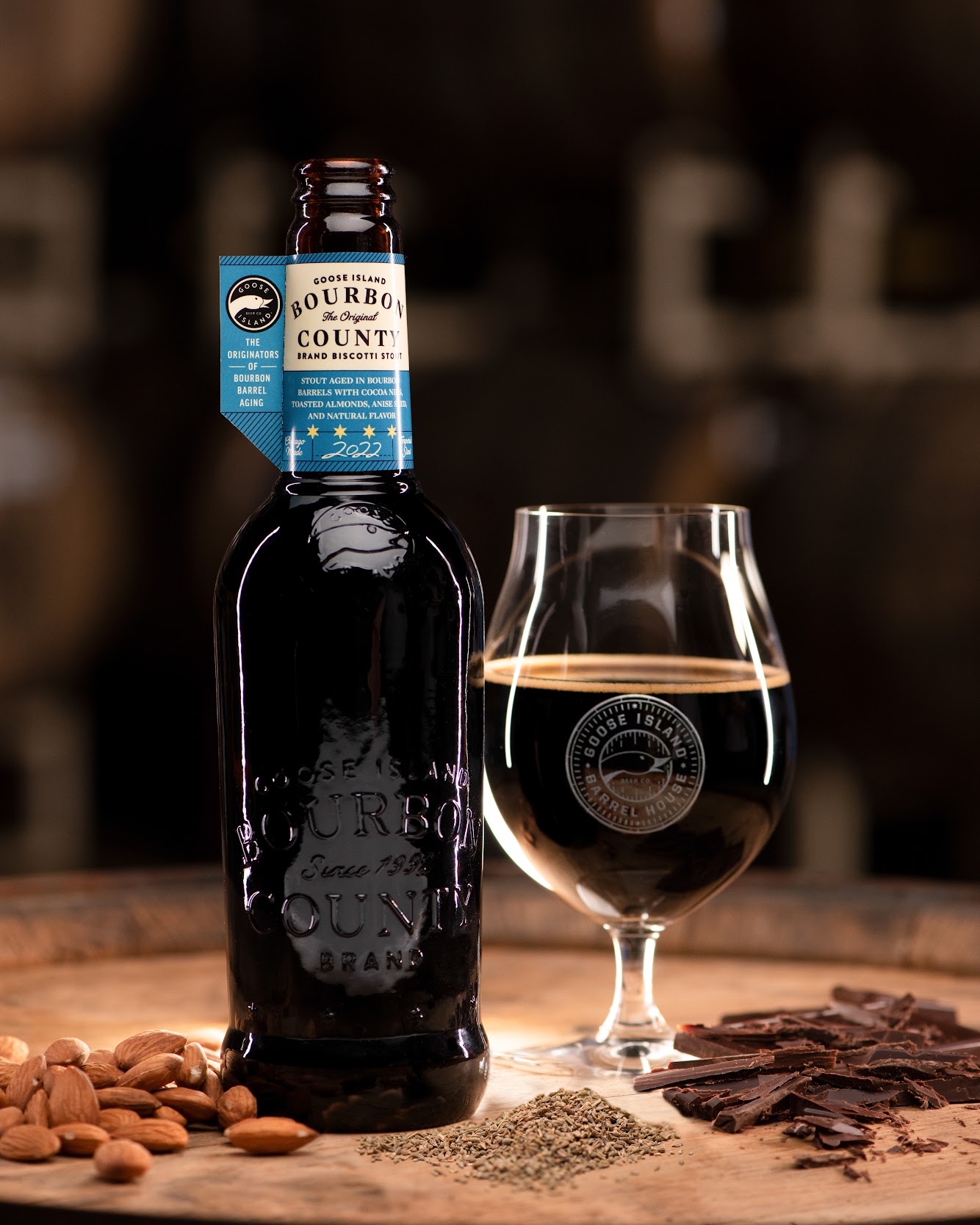 The inspiration for this beer came from an unlikely source: Goose Island’s human resources department. People manager Jill Cerone thought of the idea for a biscotti stout after grabbing a box of chocolate-dipped biscotti from her cabinet. Goose Island says flavors of anise, marzipan, cocoa and buttered toffee are found in this stout. 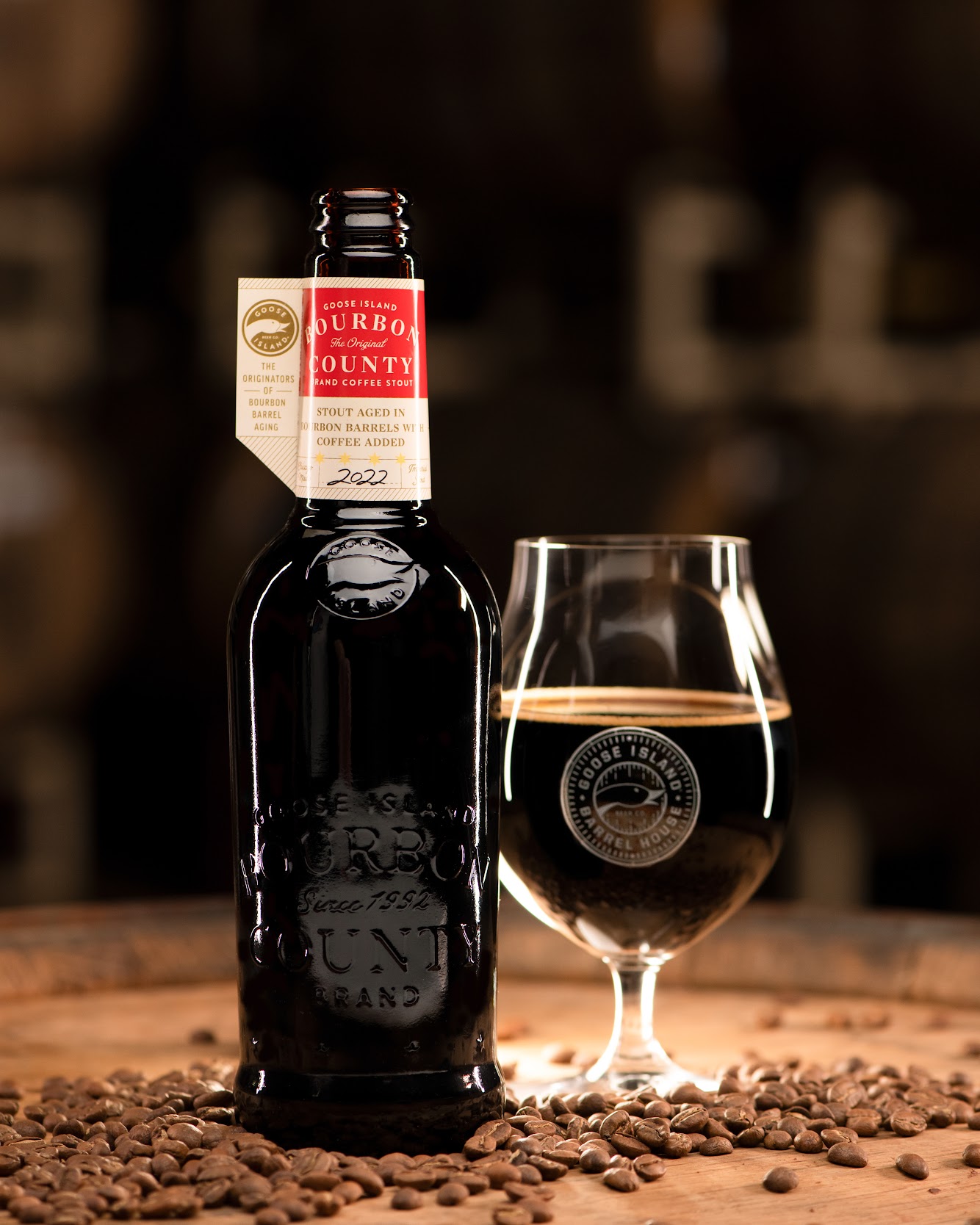 The first Bourbon County coffee stout to grace the lineup since 2017, this imperial stout was made in collaboration with Chicago coffee roasting company Intelligentsia. Goose Island calls the blend of its imperial stout with Intelligentsia’s Burundi-sourced coffee “Turihamwe,” which translates to “together.”

2010 was the first time Goose Island included multiple variants in a single year of its Bourbon County release. That inaugural lineup featured a coffee stout, and that coffee stout was made with Intelligentsia. The coffee stout features “rich chocolate, coffee, and caramel flavors that will appeal to coffee drinkers and beer lovers alike,” Goose Island wrote. 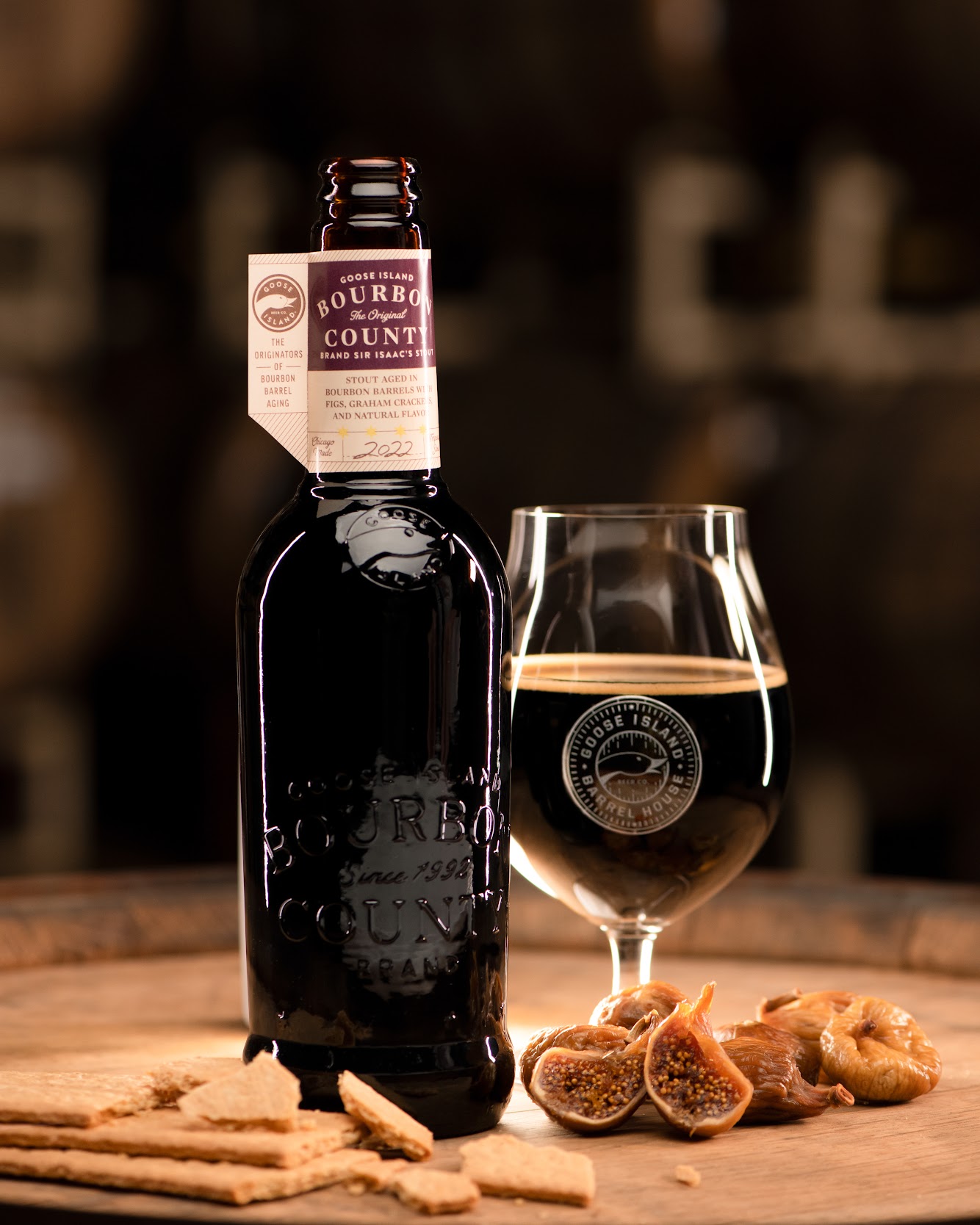 Sir Isaac’s Stout marks another idea from an unusual source. Melissa Alleguez and Ryan Hubona from Goose island’s E-commerce team created a recipe inspired by Alleguez’s memories of taking fig cookies from her grandmother’s cookie jar during summers on Lake Michigan, according to Goose Island. From this memory, Sir Isaac’s Stout, inspired by fig cookies and graham crackers, was born.

The Goose Island brewing team used 10,000 pounds of Black Mission figs to create this beer, which brings flavors of dried
fruit, honey, molasses and citrus, according to Goose Island. 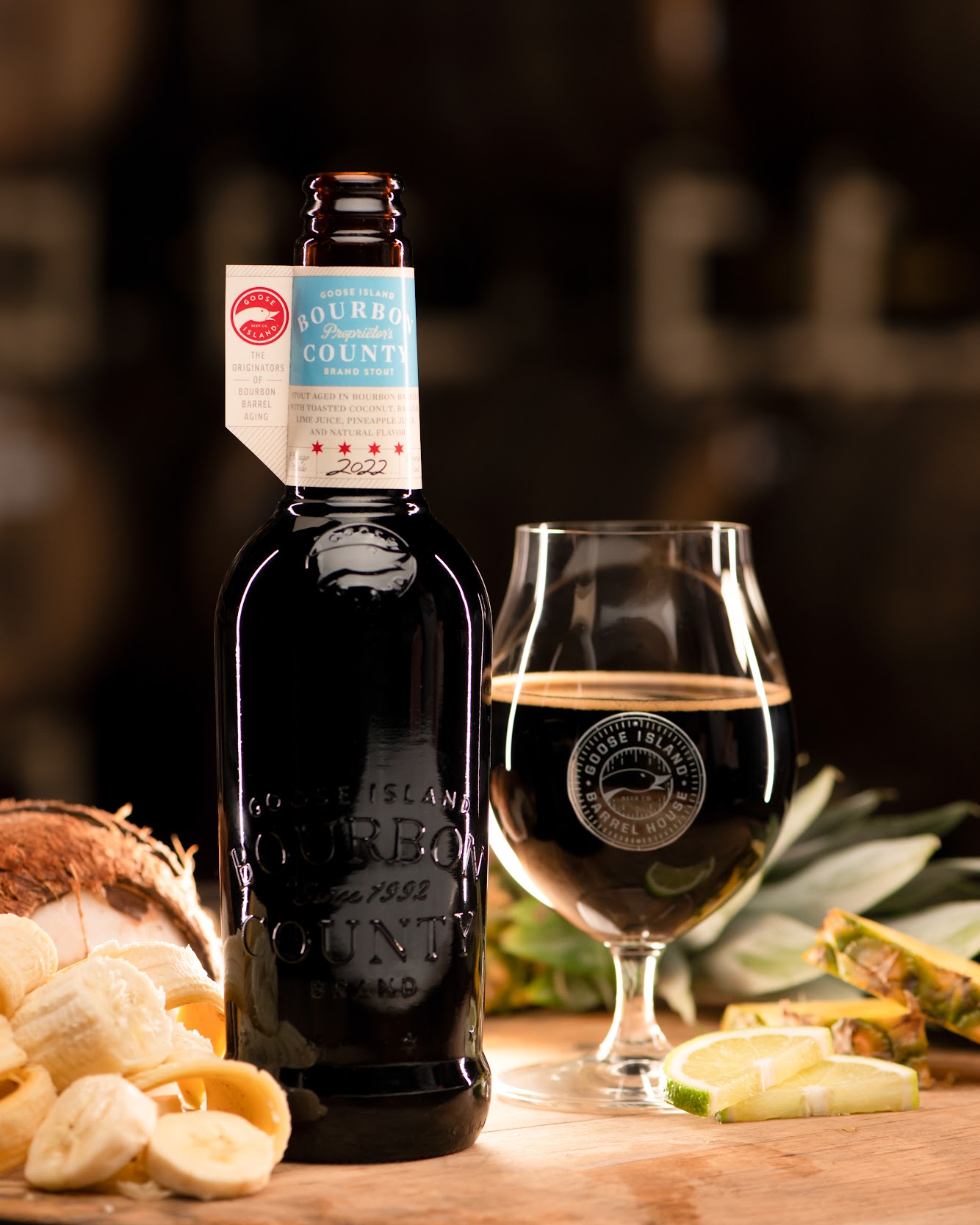 This stout’s recipe came from two Goose Island brewers who spent a night out in Chicago tasting cocktails. That inspiration led to what Goose Island calls “a brewer’s take on a jungle bird cocktail,” which is a drink containing rum, campari, pineapple juice and lime juice. Goose Island Bourbon County Proprietor’s Stout contains banana, coconut, lime and pineapple, the latter flavor a new one for Bourbon County.

Each year, Goose Island launches a new lineup of Bourbon County Stouts, one of the most anticipated beer releases of the year. The first batch of Bourbon County Stouts came about in 1992, after former Goose Island brewmaster Gregory Hall used barrels acquired from Jim Beam’s Booker Noe. Hall used the barrel’s to make the world’s first bourbon barrel-aged beer. Thirty years later, the tradition lives on.

“We are so excited to once again be partnering with Goose Island on this amazing collaboration, now to commemorate the 30th Anniversary of both our Small Batch Bourbon Collection and Goose Island Bourbon County Stout,” said Jon Marks, sr. director, global small batch, James B. Beam. “It’s incredible to think about how a chance encounter between Booker Noe & Greg Hall, 30 years ago, was the catalyst for the first-ever bourbon barrel-aged beer. It’s clear to us that because both men were true visionaries, valuing new ideas and authenticity, something truly great was created. We are proud to see the full Small Batch Bourbon Collection come together in this year’s Bourbon County Stout, which is a fitting tribute to the incredible legacies that began 30 years ago.”