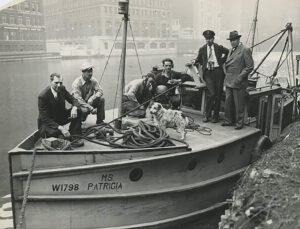 The crew of the PATRICIA is getting ready to depart for the WESTMORELAND. (PHOTO: Great Lakes Marine Collection of the Milwaukee Public Library/Wisconsin Marine Historical Society)

On Milwaukee recently reported on a historical story about a brave excursion in 1936 made by three men to rescue almost 350 barrels of Shipwrecked Whiskey from the sunken WESTMORLAND.

The WESTMORELAND was a ship that carried cargo from the Great Lakes to Chicago in 1854. The ship sunk after hitting a rock, and all of its load went down with it. But, in 1936, three men decided to sail out and salvage what they could from the wreckage. They were looking for anywhere from 220-350 barrels of whiskey and wine.

The WESTMORELAND also had up to $100,000 in gold on board, according to rumors. But with prohibition recently overturned, people were more interested in whiskey barrels than the gold.

At dawn, Harry Gilken, William Schoknecht, and John Browne loaded several months’ worth of supplies on a lighthouse tender PATRICIA and departed. According to On Milwaukee, the PATRICIA was equipped with a seven-ton hoisting boom, an air compressor, and an underwater torch apparatus.

While Browne’s crewmates thought the wreckage they had found was the WESTMORELAND, Browne disagreed. He reported the water was so cold at that depth that searchers could only remain a few minutes, and little could be seen “because of fog on the diving helmet view plates.”

Ultimately, the crew came back mostly empty-handed, without finding the 350 barrels of whiskey or knowing if the shipwreck they discovered was the one they had set out to find. However, The WESTMORELAND was found in 2010 by Ross Richardson at the bottom of Platte Bay, near Traverse City. Sadly, it did not contain any gold or whiskey.