E Rémy Martin & Co has filed a complaint against Sire Spirits, Vetro and VSPA, in New York. Sire Spirits are owned by 50 Cent and produces the Branson Cognac brand.

However, in true 50 Cent fashion, the rapper seems to be taking it as a compliment for becoming competitive in the industry. He took to Instagram last week to talk about the lawsuit saying, “They are afraid of me already. Branson Cognac is the new wave. Remy is #2 behind Henny and worried about Branson Smh. I’m just getting started.”

According to the case filing, the Cognac maker said Sire Spirits had ‘wilfully and blatantly designed their bottle to unfairly capitalize on the goodwill and reputation’ of its Rémy bottle mark.

According to Spirits Business, Rémy Martin said the similarities of the two bottles would likely confuse consumers due to their ‘stark similarities. The lawsuit has also noted that the Rémy bottle is ‘distinctive, has become well known, and, indeed, famous, to the trade and members of the purchasing public.’

“’ Rémy Martin also argued that the Branson bottle is a ‘near exact reproduction’ of the brand’s Centaure de Diamant bottle, released as a ‘one-of-a-kind’ bottle design in 2010.” According to Spirits Business. The French firm is seeking injunctive relief and monetary damages.

Branson Cognac has yet to make an official comment on the lawsuit. 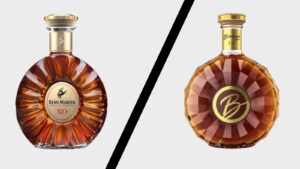 Rémy Martin on the Left and Branson Cognac on the right. Side by side comparison of the bottles.