Diageo has unveiled the second release of its Prima & Ultima single malt Scotch whisky series, and the prices are outrageous. 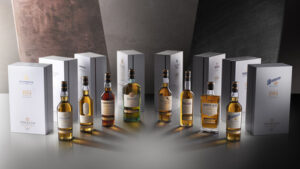 “This is a selection of exceptional single malts – some that have never before seen the light of day and others that are the fleeting and final examples of their kind,” says master blender Maureen Robinson, a 40-year Diageo veteran, was chosen to curate the whiskies in the release.

As stated in the press release, Robinson’s picks include a rare Lagavulin; a bottling from Brora, drawn from the last of the distillery’s casks from 1980, and The Singleton of Glendullan 1992, from a unique trial in which the spirit was kept in refill casks before spending fourteen years in two small ex-Madeira barriques.

But let’s be real here, $30k for whiskey is a little steep. However, the Prima & Ultima collection has been successful in the past, and people love investing in rare spirits, so chances are, the same will be true for this 2021 collection.

With only 376 sets are available to purchase exclusively through appointed Prima & Ultima agents, take your second mortgage out now to be able to grab a set and register your interest at www.theprimaandultimatecollection.com until 23 August.