A Bourbon Born out of Female Empowerment | Whiskey Raiders
Article

A Bourbon Born out of Female Empowerment

The new California-Based Distillery Lynxx Spirits has released a Bourbon, intending to encourage women to work hard and unwind with sophistication.

Rachel Svoboda founded Lynxx Spirits with a female empowerment lifestyle in mind. This Bourbon was made for women, by women, with women’s taste preferences in mind as well. Female testers were also used as the primary audience for feedback.

The Lynxx team has also done their research and it shows just how much females love whiskey and bourbon, not just fruity wine and vodka. In fact, 70% of females make the alcohol purchase decisions for their home, and 63% of females are drinking the same or more Whiskey this year than last year. 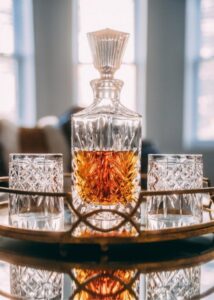 “I believe in making every day elegant and extraordinary, I always have candles burning in my house and music playing constantly. I surround myself with things that I love.” With such an elegant woman leading an all-female team, we can only imagine how decadent this bourbon will be.

Lynxx Bourbon is a low-calorie, gluten-free 80 proof Bourbon. It has a deeply layered aroma and has a complex mix of creamy vanilla and warm spices to entertain the mouths of both men and women.

There is a rich flavor with notes of creamy vanilla and caramel on the nose, all underscored by familiar spices such as nutmeg and cinnamon. The wheat smooths out the flavor and it retains the complexity of a single barrel straight bourbon.”

Lynxx Spirits Bourbon is available to purchase at their website for $120. Customers will also have the option to join the Owners Club and receive 10% off all $199 or more orders, plus free shipping.

With such a powerful message to share, following this Female Empowered company is easy. Head over to the website to check them out.