This Forgotten Whiskey Is Selling For $45,000 | Whiskey Raiders
Article

This Forgotten Whiskey Is Selling For $45,000

With only 70 bottles available for purchase, Ireland’s oldest ever whiskey collection will be released this May. A single bottle will cost $45,000.

After 150 years in business, the Old Midleton Distillery in County Cork, Ireland, closed its doors, and multiple casks of whiskey had faded away, forgotten. That is until last year, when the lost whiskey innovations were rediscovered and now made available to the public for purchase.

According to CNN, the first release was a 45-year-old peated single malt created by master distiller emeritus Max Crockett and has been aging at the shuttered distillery ever since then- four generations to be exact.

The second is a 46-year-old single pot-distilled whiskey from 1973. 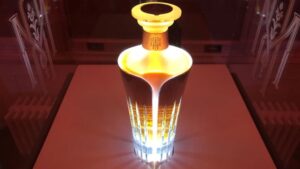 The Flavor in Chapter One Whiskey

CNN did tastings with both whiskeys, and the conclusion is that they are nothing less than incredible. “Bit of blackcurrant, berries. Hint of anise, touch of ginger, and then that nutty flavor. Toasted oak and a hint of caramel.” Midleton’s current master distiller Kevin O’Gorman.

The Flavor in Chapter Two Whiskey

Chapter two whiskey is described as a “Unicorn Whiskey” “When we add water to whiskey, it just opens up the flavors and aromas,” explains O’Gorman. “In this case, it becomes more fruity, again those toffee fudge notes.”

There are just 70 bottles of Midleton Very Rare Silent Distillery Collection Chapter Two in the world. According to CNN, the whiskey is sold in a hand-blown Waterford Crystal decanter and held in a wooden cabinet made from reclaimed whiskey vats.

“Tasting a fine whiskey is like skimming stones across a lake. The first sip breaks the surface, then the ripples of flavor spread out, but there are unexplored depths still to savor.” Kevin O’Gorman Midleton’s current master distiller

Here at Whiskey Raiders, we do more than write about current events in Whiskey. We review every type of whiskey under the sun and aggregate the scores and opinions of other significant voices in the world of whiskey. Check out our Review Archive for reviews and thoughts from our in-house critic. If you’re interested in getting a shot of whiskey in your morning email, sign up for our Daily Dram Gram!