The bottle stands at 5’9 feet tall and holds over 311 liters, and not surprisingly took over an hour to fill. This bottle also beat the previous record by 83 liters. 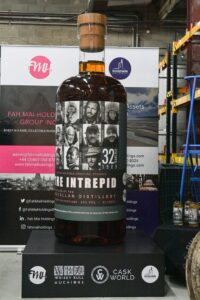 Why Make A Giant Bottle?

The goal behind filling the giant bottle was to raise money for several charities, and the companies filled 14 bottles of The Intrepid total. “Only 14 sets of ‘The Intrepid’ will go on general sale, with each 12-bottle set consisting of a replica of the record-winning bottle featuring the faces of different famous explorers, athletes, and adventurers.” According to The Drinks Business.

These lucky charities can expect to make substantial money considering a 700 ml bottle of original 30-year-old Macallan Oak sells for around $5000. Considering that The Intrepid contains well over 400 of those bottles, it is safe to say the auction of these giant bottles will sell for an exceptional final amount.