A Whiskey Decanter Doesn’t Do Anything- Hear Me Out

Who can’t picture Richard Gilmore pouring himself a glass of scotch before Friday night dinners on Gilmore Girls? It was never out of the bottle, only out of a fancy crystal decanter. However, similar to owning a Tesla, decanters for whiskey are for the show of it.

Unlike a wine decanter, whiskey decanters do not serve the whiskey inside. Wine decanters allow the wine to “open up” as it is exposed to oxygen. While it is still debated as to how much oxygen is enough for a wine to breathe, it is known that exposing the wine to oxygen does change the wine. 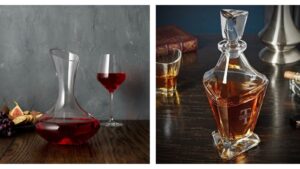 Whiskey, on the other hand, is a different story. Whiskey is a finished product, and the Scotch Whisky Association said it best “Unlike wine, whisky does not mature in the bottle. So even if you keep a 12-year-old bottle for 100 years, it will always remain a 12-year-old whisky. As long as the bottle is kept out of direct sunlight, the Scotch Whisky will not deteriorate, even if it is opened.”

That being said, whiskey experts do stress that when a bottle of whiskey is opened, the taste does get smoother. So while opening the bottle will help with flavor, storing the whiskey in a decanter will not.

Should you use a Whiskey Decanter?

Functionally speaking, there is no purpose in storing your whiskey in a different container than the originally purchased bottle. However, decanters do offer an aesthetic appeal.

For instance, It is a great way to disguise and serve your Basil Hayden’s 8yr Bourbon whiskey to your friends without anyone the wiser.