Many Consider Water in Whiskey Sacrilege; They're Wrong 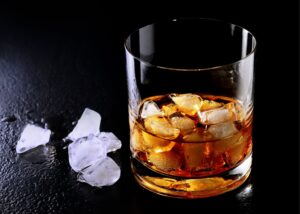 There are many schools of thought on how whiskey should be enjoyed. Some people like theirs neat, while others add a little water or drop in an ice cube. But the question remains, is there a reason to put water in whiskey, and when is the best time to do it?

Adding water to whiskey frees up more aroma molecules, allowing them to evaporate into your nose. Since appreciation of flavors happens at least as much in the nose as on the tongue, “watered-down” spirits can often seem more flavorful and help drinkers look past particularly aggressive ethanol on the nose.

Adding a  splash or two of water can go nicely with any type of whiskey you prefer, but it is especially recommended for cask strength (a style of whiskey that has not been diluted before bottling) whiskeys. With some cask strength — also known as barrel proof — bottlings reaching 60%, 65% or even 70%-plus ABV, a splash of water can often bring a welcome relief to punishing alcohol contents. Notable high proof whiskeys that can benefit from a drop or two of water to get to know them better are Elijah Craig Barrel Proof, Buffalo Trace’s Stagg Jr and in particular Uncle Nearest Master Blend Edition.

Adjusting the proof of a bottle to match your mood is also a value that’s often overlooked. During the winter, higher-proof drams are typically considered to be easier drinking, while the heat of summer lends well to a lower-proof pour during the hottest hours of the day.

In laymen’s terms, adding a few drops of water to alcohol can help it taste less intense; the water releases flavor components stuck bound to ethanol and allows it to evaporate faster. This is commonly referred to as “opening up” the whiskey. You may often hear whiskey drinkers or distillers speak about a dram feeling particularly “tight” or “closed off,” where a drop or two of water can help them blossom a touch.

So go ahead, and enjoy your favorite whiskey however you want. But if you ever find yourself wanting to up your game, don’t be afraid to add a few drops (or even an ice cube) to give it that extra bit of zing. A caution though – too much ice will lower the temperature of your whiskey enough that you may actually taste it less. Cold beverages can often dull or numb your palate a bit, so we’d recommend one ice cube at a time unless you’re really looking to chill and dilute. Even Martha Stewert has given her blessing on adding ice to wine, so why not your next dram? Compare a pour with water added and no water added, and note how the flavor changes. It’s a great way to learn more about your favorite bottles and watch them transform.

ArticleWater in WhiskeyWhiskey on the Rocks