After a Year Without Kissing, This Whiskey was Worth the Wait | Whiskey Raiders
Article

After a Year Without Kissing, This Whiskey was Worth the Wait

Fittingly being named “Kissing Cousins”, as the distillery aged the whiskey is wine barrels from Dablon Winery. The distillery says “This limited small-batch spirit has all the character of our Featherbone Bourbon, with deep earthy notes from an extra finish in Dablon wine barrels. ” 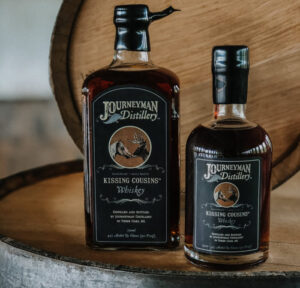 It is also notable that Esquire Magazine titled the 2021 Kissing Cousins release as the Best Whiskey in Michigan. This limited batch spirit has been called the “wine drinkers whiskey” by the distillery.

Journeyman Distillery’s tasting notes say it is “Radiant tawny in color, with cream soda and vanilla on the nose. Notes of toffee and caramel are noticeable up front, followed by full-bodied plum, and fig with a whisper of black licorice on the back end.”