Alcohol Consumption in Ireland Has Dropped 32%; Here's Why
Article

Alcohol Consumption in Ireland Has Dropped 32%; Here’s Why 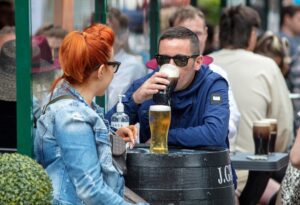 People sit with their drinks at a table outside a re-opened pub in Dublin, Ireland, on June 7, 2021, as bars, restaurants and cafes resumed outdoor service as part of the latest lifting of Covid-19 restrictions. (Photo by PAUL FAITH/AFP via Getty Images)

The Irish Independent recently reported that drinking trends in Ireland have seen a significant downturn in the past 20 years. According to data, alcohol consumption has dropped by 32% since 2001, including a dip of 4.7% between 2020 and 2021. The shift is primarily due to government initiatives and shifting priorities among young people.

Several factors affect the change in the hospitality industry, with inflation and rising insurance costs being two. Still, Bank of Ireland head of hospitality Gerardo Larios Rizo told the Irish Independent that because the government began implementing stronger regulations, including a smoking ban, tighter drink-driving regulations and, more recently, “segregation” of alcohol in supermarkets.

The segregation of alcoholic drinks in stores was introduced in 2020, followed by minimum unit pricing, which came into force earlier this year. This set a minimum price for any alcoholic drink based on its alcohol content. As a result of these changes, people are drinking less alcohol overall and spending less money in bars and restaurants.

Unfortunately, the reduction is hurting the hospitality industry, with many businesses struggling to stay afloat. However, some positive signs are emerging, with Rizo stating that people are becoming more health-conscious and are choosing to drink in moderation. If this trend continues, the hospitality industry may eventually recover from the current downturn.

The alcohol industry is facing declining sales due to a decrease in consumption among younger generations. This trend is driven by a number of factors, including greater acceptance of sobriety and the growing popularity of no- and low-alcohol drinks.

While this may seem like bad news for the industry, there is one silver lining: Consumers reportedly spend more when they opt for a drink due to the availability of high-quality products.