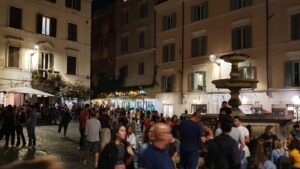 Italian newspaper La Repubblica  reported Monday that Italian police slapped an American tourist with a €450 ($457) fine for drinking beer and eating gelato while sitting by the historic Fontana dei Catecumeni (Fountain of the Catechumens) in the Piazza Madonna dei Monti.

It’s said that the tourist ignored the police’s request for him to move away from the fountain while eating. However, the American claimed he simply did not understand the authorities and was not intending to be malicious.

After being handed the fine, the unnamed American reportedly said, “I didn’t know the rules, I didn’t know I couldn’t sit down. I didn’t understand what you were saying to me.”

Rules surrounding historical monuments in Rome can be strict, but only because it’s a fight to preserve them. Roman authorities are concerned that picnickers could cause damage to the centuries-old sites. Typically, Fontana dei Catecumeni is taped off so visitors can’t get too close or destroy it, but the tape had been removed for unknown reasons.