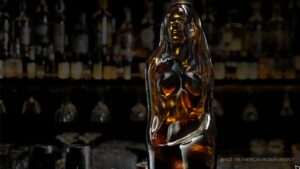 American Woman Whiskey is making its debut in Colorado by releasing two new expressions; a 92-proof straight bourbon and a cask strength. While the whisky inside the bottle has been well received, the bottle itself is a huge step in the wrong direction for the whiskey industry.

Founded by John Lupori, he says he hopes to promote love, life, liberty, and the pursuit of happiness with the whiskey brand. “His love of America, art and interesting whiskey culminated in this vision, this sophisticated American icon that promotes all the positive virtues in a great society.” According to the American Woman Whiskey website.

“Her story has long been part of our story, the American Story. While whiskey is easily associated as a man’s drink throughout the birth of the bourbon empire, and our growth as a nation, a beautiful bourbon has the qualities that also reflect a strong and sophisticated woman.”

Frankly, using a whiskey bottle that objectifies women so blatantly is not doing anything to change whiskey’s association with being a ‘man’s drink.’ In an industry that is already steeped in a history of misogyny, this bottle encourages that mindset. It perpetuates the idea that in this industry, not only do women not matter, but they are nothing more than an object both inside and outside of the business.

Bottle aside, the company’s frequent references to bourbon and whiskey as a woman have recently been a heated debate of sexism. Most notably, The latest edition of Murray’s Whisky Bible. In the book, Murray refers to a Canadian Club release: “Have I had this much fun with a sexy 41-year-old Canadian before? Well, yes, I have. But it was a few years back now, and it wasn’t a whisky. Was the fun we had better? Probably not.”

It’s sad to know that with as much progress as people and distilleries are making, Fawn Weaver and Julia Ritz Toffoli, for example. It continues to be an uphill battle to create a safer and more inclusive environment in the industry.