Ammunition Whiskey Collection- A Marriage of Craft and Science 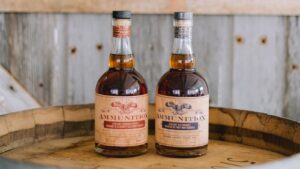 One of Sonoma county’s fastest-growing independent wineries, Daylight Wine & Spirits has launched a new collection of bourbon and rye Ammunition Whiskey. Crafted for the loyal rugged American frontiersman, this whiskey under its Ammunition brand challenges convention as a winery now producing alcohol in an unconventional manner.

“We’re thrilled to expand the Ammunition family with bold, well-aged, and approachable Bourbon and Rye,” says Andy Wahl, Co-Founder of Daylight Wine & Spirits in a prepared statement. “We’ve applied our timeless craft and care to the Ammunition Whiskey collection, so whether you’re a wine or whiskey drinker – or both! – Ammunition will continue to be synonymous with the highest-caliber beverages.”

The company’s success is largely in part of how well Ammunition Wine has been received. The company also attributes that success to their customer’s appreciating “the ethos of hard work and the relentless independent spirit.” In what they call a “marriage of craft and science” the new whiskeys are Daylight’s unexpected approach to whiskey.

Ammunition Bourbon and Rye will be available in May 2021. “Bourbon whiskey drinkers will love the multidimensional notes of sweet caramel and vanilla with subtle notes of cherries and bacon,” says Wahl. “And the straight rye whiskey has hints of rich butterscotch, rye spice, and caramelized red berries.”