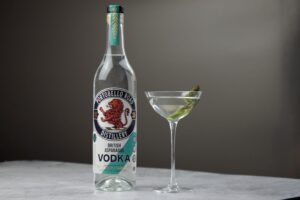 Portobello Road Distillery has just released what it claims is the “world’s first asparagus vodka.”

Move over, cucumber and Hendrick’s, there’s a new vodka in town- asparagus vodka.

Portobello Road Distillery has just released what it claims is the “world’s first asparagus vodka,” using asparagus grown on Portwood Farm in Norfolk. This will be a limited-run vodka from this distillery and can be used in cocktails such as the Negroni or Martini.

Portabello Road will only release 600 bottles the vodka annually after the start of asparagus season, using asparagus grown exclusively on Portwood Farm. What’s more, is that the distillery initially planned to make it an asparagus gin. However,

“The fact that it was a gin and therefore required to be juniper-led meant the actual asparagus flavour was quite subtle,” said Portobello Road Distillery co-founder Jake Burger. ” So when we stepped into vodka production, we wanted to revisit the ingredient, but this time in a product where the flavour could really stand out and sing in mixed drinks.”

According to the distillery, there is an “earthiness and nuttiness” to the vodka’s flavour, with vegetable like notes that “lives long on the palate.” Its lasting impression is “freshness, softness, and creaminess.”

“When you give our British Asparagus Vodka a good old sniff, there’s no mistaking what it is – right away, you’re hit with the unique aroma of asparagus,” claims Burger.

Hopefully, someone out there will find that appealing.