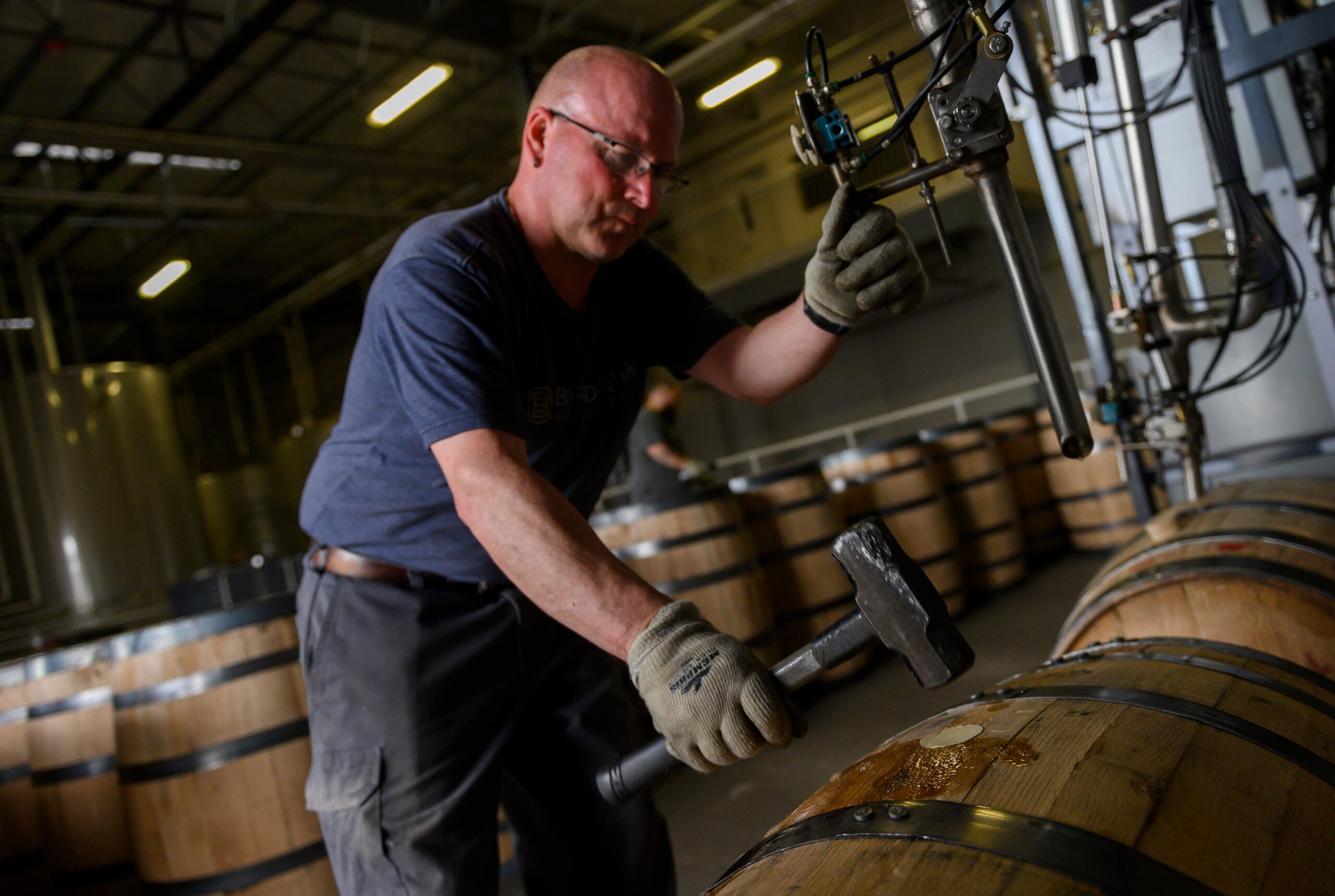 An employee at the Bardstown Bourbon Company seals a barrel after it was filled with bourbon April 11, 2019, in Bardstown, Kentucky. Read on to learn all about barrel-entry proof. (Photo: ANDREW CABALLERO-REYNOLDS/AFP via Getty Images)

In alcohol, proof is the measured amount of ethanol. The origin of the term comes from England, where it meant 1.821 times the alcohol by volume around the sixteenth century. Today, while the term has been phased out by many countries, including the UK, where it originated, and the European Union, it stands for twice the Alcohol By Volume (ABV). The story of proof goes deeper, with some legends surrounding the ignition of gunpowder and the early use of hydrometers, but today it’s fairly standardized.

This doesn’t mean that bourbon has to come off the still at precisely 160 proof nor go into the barrel at 125 proof. Also, as seen on many bottles, 80 proof is the low and far from the high (there is no bottling proof upper limit).

The first question someone unfamiliar might ask is: “If it comes off the still at 160 proof and goes into the barrel at 125 proof, how does it get there and why?”

Well, the “why” is relatively easy to answer and will come off as cynical, even though it’s not: money. To get from 160 proof to 125 they blend water (generally over time) into the whiskey and then barrel it at 125 proof. By distilling to 160 and barreling at 125, the distilleries get the most final product, the best bang for their buck. Now, you could distill at 160 proof and barrel at 80 (the lowest legal entry proof), but the product you’d get would be less than desirable, so it’s all about striking the perfect balance. Volume matters when you’re talking about 50-plus extra bottles per barrel.

Barrel-entry proof wasn’t even fully set in stone until the Federal Alcohol Administration Act of 1935, which said that bourbon had to be withdrawn from the cistern room of the distillery at no more than 110 proof and no less than 80 proof.

Now, prior to the change in 1962 from 110 to 125 proof, the general barrel-entry proof was around 107. You may believe the tradition of “full proof” was started in recent years, but it actually goes back much further. When you saw bottles of Old Weller 107 Barrel Proof, what they were in fact claiming was the barrel-entry proof, similar to today’s full proof offerings.

In speaking with a number of master distillers past and present, this is a topic of interest and friendly debate. Michter’s is generally one of the first distilleries people go to when speaking about barrel-entry proof, as Michter’s purposefully went to a very low barrel-entry proof of 103. Michter’s believes that the lower barrel-entry proof combined with water causes a breakdown in the chemicals that causes astringency and thin, bitter oak flavors while providing the best overall flavor.

Now, you may be wondering: “You just said combined with water; isn’t that what we want to avoid?” Bourbon’s color intensity and the congener concentration, which is what produces caramels, vanilla, baking spices and more flavors, decreases as the barrel entry proof increased.

The lower proof makes it easier to dissolve those delectable sugars in the wood. Water molecules are smaller than alcohol molecules, and the water particles, therefore, penetrate the wood more easily. Once those sugars from the wood are dissolved, the tannic and unwanted flavors evaporate more quickly. Back to the water mentioned above, adding more water in the beginning means adding less at the end, and thus a more intact product is achieved.

The Russells at Wild Turkey agree that a lower barrel-entry proof produces a better, more full product. When Wild Turkey started, its barrel-entry proof was 105. At some point (this data point is lost to history, unfortunately), the barrel entry proof moved to 107. It remained 107 until sometime before 2002, at which point it moved to 110 proof, and around 2006 it was pushed to the current 115 proof, still below the maximum of 125 proof. Less water at the end is almost always going to produce a better final product assuming that the initial product that goes into the barrel is a quality product.

Exceptions to the Rule

Buffalo Trace has been running an experimental collection for a very long time, and during that ongoing series, it determined its optimal barrel-entry proofs are 115 for wheated bourbons and 125 for bourbons with rye.

This brings us to Maker’s Mark, which still goes into the barrel at 110 proof but recently released its DNA series, testing other barrel-entry proofs. Jane Bowie, whose innovation has been a phenomenal asset to Maker’s, headed this project up. Eight years ago, Maker’s Mark took a 100-barrel lot and broke them into four sets of 25 barrels each. The 130-proof distillate was then cut to 125, 120, 115 and 110 proof for each of the lots. These were then dumped at barrel proof. The results for Bowie and Maker’s? 110 proof is still the correct proof for Maker’s. I love that they tried this, though, and look forward to giving all four a go myself.

This is a long way of saying that barrel-entry proof does have an effect on the final product, but at the end of the day, it’s still just one aspect. It hasn’t stopped the rush on Buffalo Trace products and certainly doesn’t prevent them from being wonderful. The same goes for Heaven Hill and all other distilleries that use a barrel-entry proof of 125.

Can a lower barrel-entry proof make for a better final product? Absolutely. Who doesn’t love Wild Turkey or Michter’s barrel-proof rye? How about Four Roses? At the end of the day, there are many factors that go into producing incredible whiskey, and I’m confident all of the distilleries have a good idea of what they’re doing, but I do love the quest for producing the best possible product and the throwback to the mid-1900s for whiskey. Barrel-entry proof is also likely one of the reasons that some dusties are so sought after.

A few of distilleries that use a lower barrel-entry proof

Hopefully, this information provides a little glimpse into how we end up with so many varied and wonderful whiskies today!