Offensive or a Mark of ‘Rich History’? Despite Local Insistence That There’s ‘Nothing Racist’ About This Pub’s Name, It May Be Changing 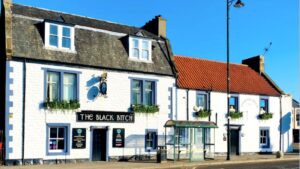 A 350-year-old pub in Linlithgow, Scotland, named The Black Bitch might be updating its name to something far less offensive according to the LAD Bible.

The pub’s owner, Greene King, announced earlier this year that the new name would be The Willow Tree. However, locals have been fighting back on the change due to the name’s historical roots associated with the town. A petition fighting the name change garnered 11,000 signatures — impressive, considering Linlithgow has fewer than 13,000 residents.

The Linlithgow Civic Trust has argued that since Greene has no intentions to change the names of two other pubs, The Black Horse or The Black Bull, he should also continue using the name, The Black Bitch.

In a statement, The Civic Trust insisted that there is “nothing racist” about the name of the The Black Bitch, arguing that “It accurately describes a female canine with a black coat.”

Regardless, Greene is planning to move forward with the name change, with the blessing of Historic Environment Scotland, which was consulted by the pub owner before applying for the name change.

Greene King is no stranger to implementing changes and has already changed the names of other English pubs that were deemed offensive, including The Black Boy in Suffolk and The Black’s Head in Derbyshire.

“Whoever they consulted on this silliness certainly wasn’t local where the name Black Bitch is borne with pride as showing awareness and respect for Lithgae’s rich history,” Salmond said at the time.