With a Former Politician and a Nike Designer on Board, Blue Run Spirits is Attacking the Booze Game in its Own Way 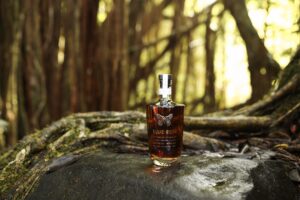 There’s something about bourbon that just seems to bring people together. Maybe it’s the unique flavor or the fact that it was born from America’s heartland, Kentucky, but one thing is for sure: Bourbon lovers are a passionate bunch. And Mike Montgomery, former finance director to Gavin Newsom and now Blue Run CEO and cofounder, is no exception. In an exclusive Whiskey Raiders interview, Montgomery discussed the future of bourbon and how Blue Run is changing the game with its unique and impeccably crafted spirits.

For those of you who don’t know, Blue Run is relatively new to the spirits scene. However, its impact on the industry is undeniable. It has released seven whiskeys in the past year, and each one has nearly instantly sold out. The most recent Blue Run release, High Rye Bourbon, completely sold out online in less than three minutes.

Montgomery teased an exciting new release called Reflection, a blend that he holds very near to his heart. That bourbon was one he said helped him through some difficult times.

“It was what got us through some really dark days. And, you know, for the moments where it wasn’t dark, it actually added a great amount of joy.

This is why we call it Reflection. This is the type of bourbon that people can drink when they’re looking to reflect on what’s happening in life. Good bourbon transports people somewhere else, whether that’s a different frame of mind or it is some sort of dream world that takes them away from their current existence.”

Another thing that sets the brand apart from the rest is its unique bottle, created by Nike designer Devon McKinney. The goal of the bottle was to capture the idea that bourbon should be for everyone.

“Bourbon for everybody. Right? Sometimes with scotch, it can feel overwhelming. Like, I don’t know how to pronounce that. You know? You have to come in in a smoking jacket or pipe in your mouth. That’s not what we’re all about,” Montgomery said. “We’re not stuffy. We’re not setting out to be this exclusive little club where if you don’t know the password, you can’t get in. This really is for everybody.

It should resonate with everybody across the board.  I come from politics, but I try to leave my politics at the door.  Because there is one thing that binds us all together. And that’s bourbon.” 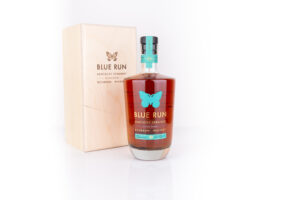 It hasn’t always been an easy road for the new brand. When asked what lessons the CEO has learned in the last year about launching a bourbon brand, Montgomery said that in his experience, which came in the midst of the COVID-19 pandemic, the hard stuff had been easy and the easy stuff hard.

“At the onset, I thought that getting the bottles and bottling and the operation side would be super easy. But it’s the supply chain that’s been incredibly difficult,” Montgomery said.

While high demand for a new product may sound like a non-problem, Montgomery said it has been a significant issue.

“If people try to get it multiple times, and they’re stymied, they hit the kind of the proverbial ‘Blue Run wall,'” Montgomery said. “What we don’t want is for them to stop to quit and be like, ‘Forget it,’ right? ‘Oh, I’m gonna go buy something else, because I’m just never going to find it — or Blue Run doesn’t want me to have it.’ No, we really do want you to have it and we are working as hard as possible to increase supply and accessiblity.”

As the bourbon industry continues to grow, we’re excited to see what Blue Run has in store. With its focus on quality and accessibility, Blue Run is a great example of what happens when you let your passion for bourbon do the talking.