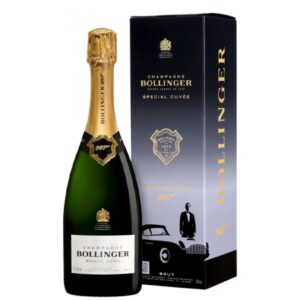 James Bond is known for his love of a Vodka Martini, but he also enjoys a glass of Champagne, specifically, Champagne Bollinger.

Champagne Bollinger has released a new Limited Edition James Bond-themed Cuvée named 007. According to Drinks Business, this new Champagne will be marketed as the Champagne of Bond in line with the upcoming release of the latest installment in the Bond Franchise, No Time To Die.

Champagne Bollinger has been the official Champagne of 007 for over 40 years now. This includes a limited edition that combines three elements of Cuvée, the Aston Martin DB%, and James Bond. Greg Williams has been the photographer that has collaborated with Bollinger on the campaign for the limited edition 007 Cuvée capturing a striking silhouette of Bond alongside his Aston Martin DB5 for the packaging.

The new Bollinger Cuvée  007 will be available from September 1, 2021, at fine wine merchants worldwide for £50.00. The new movie, No Time To Die, will release in UK cinemas on September 30, 2021, with Bollinger featured alongside Bond’s Aston Martin.

Now, if only Bond would get into whiskey, one can dream.