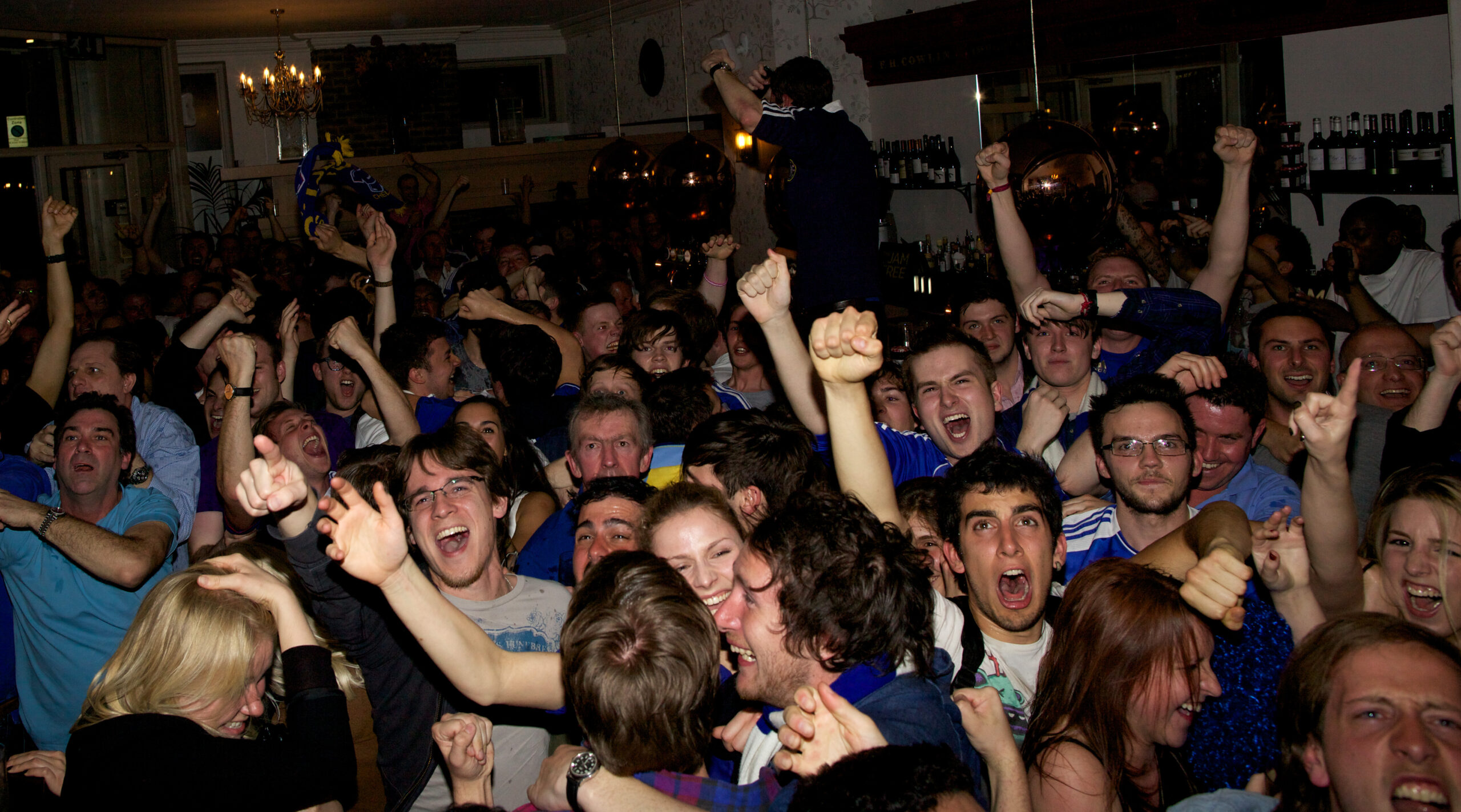 Supporters of Chelsea react to a score of their team as they watch the broadcast of the UEFA Champions League final soccer match May 19, 2012, between FC Bayern Muenchen and Chelsea FC, at a pub in Chelsea. A pub owner who was fined for coronavirus violations after some of his patrons leaped to their feet to celebrate a soccer goal is outraged amid allegations of the government throwing parties during lockdown. (Photo: Andrew Cowie/AFP/Getty Images)

Two British pub owners who were fined for COVID-19-related violations have torn into their government for hypocrisy after accusations emerged of multiple parties being held among Prime Minister Boris Johnson and other government officials in the midst of the pandemic.

Stephen Pomroy, landlord of the Cheslyn Hay in New Talbot, was fined £1,760 ($2,413) in court in September after police found customers breaking coronavirus rules in May, when no more than six people were allowed to gather together in an indoor setting and social distancing rules were in place.

Pomroy told the Birmingham Mail he is “disgusted” with the government’s handling of the pandemic.

Johnson’s former spokeswoman, Allegra Stratton, stepped down after being shown in footage joking about COVID restrictions days after an alleged gathering on Dec. 18.

“I could not believe it when I saw the footage, and what’s shocked me is, why has she resigned if there was no party?” Pomroy questioned.

Pomroy said he voted for Tory, Johnson’s party, last election, but vowed not to do so again.

“It’s disgusting, absolutely disgusting,” he said. “The people should get their fines back or he should be fined for what he’s done.”

Wellings was showing a soccer match at the bar, and customers leaped up from their tables when Leeds United scored against Manchester City. A group of council officials and police personnel who were checking to see if coronavirus regulations were being followed witnessed the celebration and slapped Wellings with the fine; his customers were supposed to be sitting down in groups of six or less.

“I thought other people were breaking the law, I didn’t expect the prime minister and all his cronies to be breaking it,” Wellings said, according to iNews. “We were trying to keep to the rules and you hear of them having a party willy-nilly. Whoever’s been to these parties should resign, because after all, they were breaking the law.

Wellings ripped into Johnson and his colleagues, saying their alleged actions are “absolutely disgraceful” and that he feels “disgusted” with the government.

“It’s one rule for the rich and another rule for the poor,” Wellings said. “It’s just ridiculous. And then they’re having cheese and wine and saying it’s OK. It’s just a complete farce, the whole lot of it.”