Bottled Behind Bars: Conviction Whiskey is Produced Entirely In Prison 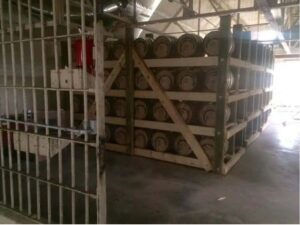 While many distilleries will build a new facility and play off the history of the location, Southern Grace Distilleries, Inc. decided to fit their operation into an existing historical facility.  Cabarrus Correctional Center operated as a prison for 82 years in Mt. Pleasant, North Carolina  and now is the only former prison in the United States operating as a [legal] distillery.

Southern Grace has made minimal changes to the facility, rather adapting their equipment to fit in the existing space and preserve the prison aesthetics.  Working in such an environment wouldn’t be complete without the ability to showcase the unique environment, which is a key part of the tours that the distillery offers.  Standard tours not only include overviews of the production and tasting their whiskey, but also take you though the prison and go over its history.  For those looking for a bit more of a spooky experience, there is an “After Hours” tour that starts in the late evening and covers more of the grounds that first held convicts in 1929.

Ghost stories and unique settings can only go so far, but it really comes down to the whiskey.  “Conviction” is a 2 year, cask strength, small batch bourbon that spends that time aging in the former inmate bunk room.  With a mashbill of 88% corn and 12% malted barley, Drew Beard of Drinkhacker was thoroughly impressed with the quality of the young spirit.