Win a Trip to the FIFA World Cup, a Year of Beer and More: Budweiser is Placing 100s of Prize Boxes Around the World; Here’s How You Can Discover the Coordinates 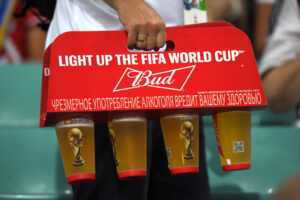 A fan carries a tray full of Budweiser beer during the 2018 FIFA World Cup Russia group F match between Germany and Sweden at Fisht Stadium on June 23, 2018, in Sochi, Russia. (Photo by Stu Forster/Getty Images)

As the official sponsor of the FIFA World Cup, Budweiser is getting fans worldwide excited for the upcoming tournament with a special promotion.

Beginning Saturday, Budweiser will be partnering with some of the biggest names in soccer, including Lionel Messi, Neymar da Silva Santos Jr. and Raheem Sterling. Budweiser has dropped hundreds of prize boxes for fans around the world. Fans can track down these prizes by finding the coordinates

To be eligible to win, fans must purchase a specially marked Budweiser product and scan the QR code on the packaging. Coordinates leading to prize boxes will be revealed to those who scanned the exclusive Budweiser QR codes. The prizes include signed memorabilia, a year’s supply of Budweiser and the grand prize — a trip to the World Cup.

Today could be the greatest day of someone’s life. Today is the day @FIFAWorldCup tickets drop around the world. The drop is now live.🚨 #YoursToTake #TheDrop pic.twitter.com/mb87RX9f1Q

“This year’s tournament is a unifying global moment that celebrates the possibilities of what’s to come and the athletes that continue to inspire us,” said Todd Allen, global vice president of marketing, Budweiser, said in a news release. “As the Official Beer of the FIFA World Cup, we are engaging fans and elevating how they experience the games. With tomorrow’s drop, we are just getting started with what promises to be a banner year for football fans everywhere.”

Budweiser has sponsored the FIFA World Cup since 1986. The sponsorship deal will end after this year. No word yet on whether the two sides will renew past 2022.