Budweiser Strike Could Cause Beer Drought This Summer
Article 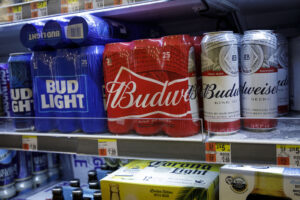 Cans of Budweiser and Bud Light sit on a shelf for sale at a convenience store, July 26, 2018, in New York City. (Photo by Drew Angerer/Getty Images)

A strike over a recent pay cut for employees of Budweiser Brewing Group’s Samlesbury site means there could be a beer drought over the summer. The Samlesbury site produces Budweiser, Stella Artois, Becks, Boddingtons and Export Pale Ale.

The Drinks Business reported that the issue arose after months of discussion with Budweiser, which AB InBev owns. A full and final offer of a 3% pay increase for 2022 and 3% for 2023 and increasing overtime rates were offered to workers.

However, the cost of living and inflation has skyrocketed, with the latter up to 9%. Therefore, the offer ultimately would amount to a pay cut for the beer group’s employees.

“They are choosing to ignore workers and put profit before people with this derisory pay offer,” Stephen Boden, a GMB Union employee, said, according to The Drinks Business. “Workers are rightly angry, and if this strike goes the distance, Budweiser could face a summer beer drought. How can they expect hard-working staff to accept a real-terms pay cut?”

Boden did say that there is still time for the beer conglomerate to turn things around before it’s too late. If the company can come to an agreeable solution with its employees, a summer without Stella can be avoided.