Castle & Key has announced that they have become the 43rd member of the Kentucky Distillers’ Association.  The KDA works as a non-profit organization that unites and leads the states distilleries in the spirits industry.

“We’ve appreciated the leadership of Eric Gregory and his team at the KDA in championing Kentucky’s signature industry around the world, and we look forward to working alongside all other members of the organization,” said Castle & Key co-founder Will Arvin. 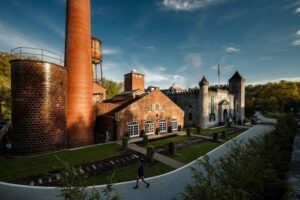 C&K will join as the 15th member at the “Heritage” level, which means they age more than 50,000 barrels of whiskey per year.  The level means they will have more influence in the management of the group and help shape the future of the industry.

With their induction into the KDA, the distillery hopes to soon be added as a stop on the Kentucky Bourbon Trail Craft Tour.  Hopefully, this could mean that they soon will be releasing their first bottle of bourbon.  The distillery has released their first whiskey in the form of their Restoration Rye, which is the first whiskey to be released under the distillery since National Distillers stopped production in 1972.  We know that they have put down plenty of Bourbon to rest since starting the stills again in 2016, and the Rye has impressed tasters so far, a bourbon release coinciding with their place on the trail could be a match made in Whiskey Heaven.