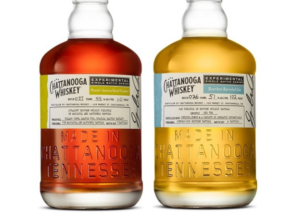 Chattanooga Whiskey began its experimental series back in 2017 with Batch 001. The 100-gallon Experimental Distillery in Tennessee is the birthplace of The Experimental Single Batch Series. A limited collection of single-batch whiskeys and spirits.

The Experimental gin is created with botanicals like honey, hibiscus, coriander and juniper. It’s a sweeter, fruitier style of gin that explores the “Old Tom” variety. With their signature Tennessee High Malt mash bill, the blend of 10 botanicals is infused and distilled before being aged in single-use bourbon barrels for over six months.

The brand says that the final product is a gin that would appeal most to whiskey lovers because of its fruity flavor profile.

The Experimental bourbon was made from a high malt mash bill that includes Venetian-grown pilsner, and it aged over two years before being moved into separate finishing casks. Finally, after the whiskeys matured in their own casks for two years, they were blended together to create a liquor that is said to be both grassy & floral.