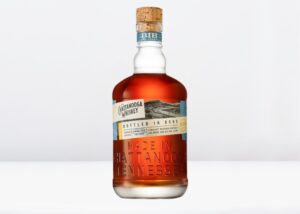 Chattanooga Whiskey on Thursday announced the next release in its Bottled in Bond Vintage Series: Spring 2018 Vintage. The series is exclusively crafted at the brand’s Riverfront Distillery and is a single-season, vintage-dated expression of Chattanooga’s Tennessee High Malt style.

To be labeled Bottled in Bond, bourbon must be the product of one distillation season and from one distillery. It also needs to be aged in a federally bonded warehouse for at least four years and bottled at 100 proof.

The Spring 2018 Vintage Chattanooga Whiskey, which was barreled from January through June 2018, is made from four separate high-malt bourbon mash bills produced within the same distilling season and each containing at least 25% specialty malted grains. According to a news release from the distillery, the result is a unique approach to one of the world’s oldest quality standards.

The Spring 2018 blend includes a small percentage of a new recipe to the series: R18016 and is made with approximately 20% minimally dried “green” malt in its mash bill. The unique expression has a suggested retail price of $52.99.