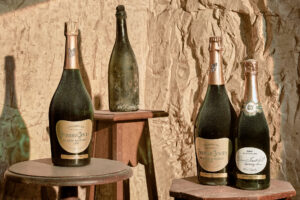 Another record-breaking auction for the books happened Friday.

A bottle of Perrier-Jouët Champagne from the 1874 vintage was sold at Christie’s in London and set a world record for the most expensive bottle of wine ever. The buyer is unknown, but we can’t help but wonder what they plan to do with this unique purchase.

Before the auction, Tim Triptree, international director for Christie’s Wine & Spirits Department, spoke to just how rare and well-preserved this bottle was. According to Food & Wine, the bottle in question was a single, unlabeled bottle. “As far as I know, no one other than Perrier-Jouët has any of this champagne left. It has spent almost 150 years in ideal conditions… It’s had no movement, and the vault’s darkness, temperature of 11 to 14 degrees Celsius, and 98 percent relative humidity are perfect for maturation.” 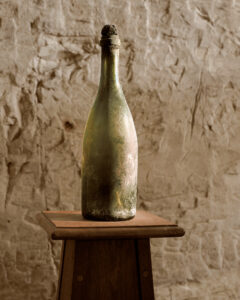 The unlabeled bottle of champagne was auctioned for almost $57,000. (Image via Perrier-Jouët Vintage).

However, there was more in the price tag than simply the bottle. Included is a VIP Maison Perrier-Jouët Experience, which consists of a night at Maison Belle Epoque for up to 10 people, a guided tour of the house and cellars, a tasting of current Perrier-Jouët cuvées and the 1874 vintage with Cellar Master Séverine Frerson, and a gastronomic meal cooked by three-Michelin-starred chef Pierre Gagnaire with champagne pairings from the Oenothèque Perrier-Jouët.

Triptree said that if the winner of the auction does decide to drink the champagne, they should expect that “it will probably have lost most of its fizz, as the effervescence declines over time, but it should still retain a vibrant acidity and freshness, The color will have moved from a pale lemon-green to golden amber, and it will also have developed additional complexities, changing from the notes of citrus and green apple that are common in young champagne to a more mature palate of butterscotch, caramel, and honey.”