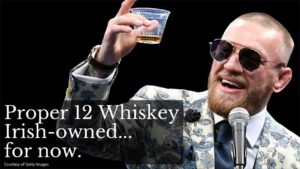 So, it’s not “Irish-owned forever,” then?

Conor McGregor sells his stake in the Irish whiskey brand Proper 12 to Becle, based in Mexico and the “largest tequila company in the world,” according to their website.

Becle has been a longtime shareholder of Proper 12, and in 2020 they upped their shareholdings from 12 % to 49% before they made a move to buy the entire brand outright this year. However, Becle is an established spirit firm in its own right, owning brand names such as  José Cuervo, Three Olives, Pendelton, and Kracken, to name a few.

It’s still unknown if McGregor will remain involved with the brand, but one thing we do know is he’s made quite a killing in the sale, potentially doubling his net worth. According to the UK blog Joe, He will make about $155 million- bringing his net worth to just about 300 million. 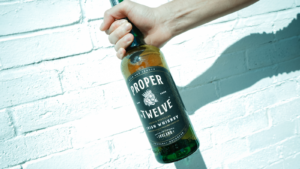 Even with the lackluster reviews, In April 2019, The Irish Times reported that Irish whiskey sales had topped $1 billion in the United States for the first time. Much of that was due to the popularity of McGregor’s whiskey after their launch in late 2018.

“Jameson, which has led the Irish whiskey renaissance, is seeing a slowdown in growth in the US with analysts attributing it in part to the launch of Conor McGregor’s Proper No Twelve brand last year.” Irish Times

A huge feat for such a young brand and something that McGregor had a lot to say about. “Was there ever any doubt I’d turn Whiskey to a Billi? I turned “human cockfighting” to 4.2. I’m gonna toast on this fine Thursday this amazing news.”

It will be interesting to see where his entrepreneurial career takes him next after the tolerable whiskey’s surprising success. As well as see how Becle decides to handle the whole “Irish-owned forever” trope attached to it. But to be candid, with $300 million in his pocket, he probably doesn’t care he was wrong about that.

“Sláinte to the only true Irish Whiskey we have left, ‘Proper No. 12’. Irish owned forever. Thank you all. It has been my pleasure.”           -Conor McGregor via Twitter