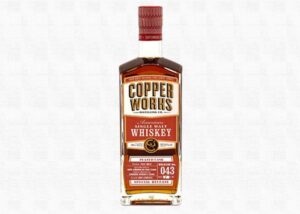 This release was been matured for three years in a charred new American oak barrel before being transferred into an Ardbeg Scotch whisky cask, where it stayed for one year. This gives the whiskey notes of rich smoky flavor that is sure to please any fan of scotch whisky.

If you enjoy rich smoky whiskeys, this one is for you,” Jason Parker, co-owner and president of Copperworks Distilling, said. “Although this release only gets its smoky flavor from the cask (not the barley we used to brew it), it has a much more heavy smoke flavor than our Washington Peated Whiskey Release 042.”

On the nose, there are hints of a campfire, blackberry, and balsamic. The liquid has flavors of roasted apples, caramelized sugars, dried fruit, and vanilla on the tongue. Dry red vines, brisket, and iodine are among the tastes in the finish.