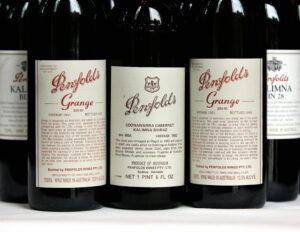 A Penfolds 1962 vintage Cabernet Shiraz (C), voted number seven in a list of 100 of the world’s greatest ever wines, is flanked (L and R) by 1991 vintage bottles of the famous Penfolds Grange red wine, at a special re-corking clinic in Sydney, 12 July 2006. Fake bottles of Penfolds wine were being counterfeited. (Photo credit GREG WOOD/AFP via Getty Images)

The raid, which took place in Jiangsu province, uncovered 8,000 bottles of fake wine. This is a huge blow to the Penfolds brand and could have a significant impact on sales.

“The fake wine manufacturing and selling network was uncovered after one customer reported a suspicious Penfolds Bin 407 bought from an online shop for RMB 699 ($110). The customer noted its ‘poor taste’ and the price disparity of the same wine sold through the official channel, which retails for at least RMB 1,000 ($157) per bottle,” Vino Joy News reported.

Vino Joy also noted that China’s high tariffs on Australia’s most famous wine brand, Penfolds, have slowed down its exports to its most profitable market. Knockoffs of the wine, on the other hand, are still being widely produced.

Before the tariffs, China was by far the largest buyer of Australian wine, purchasing 40% of winemakers’ exports. Despite this, Penfolds is still one of the most well-known imported wine labels in mainland China, which means it’s also one of the most counterfeited.

The wine was sold online through the Penfolds registered brand. The investigation revealed that the packaging, logo and workmanship did not match those of authentic Penfolds wines and that Penfolds did not give permission for the online store to create and market items using its registered trademark.

What’s more, the counterfeits were being sold at an alarming rate; approximately $12.6 million worth of phony Penfolds had already been sold through the online shop and its associated wine shops to a large network of cities and provinces across China.

Six suspects were arrested on-site, and over 8,000 bottles of unfinished and bottled fake wines were seized, as well as more than 64,000 items of logos, trademarks and packaging using the Penfolds name, according to Vino Joy News.