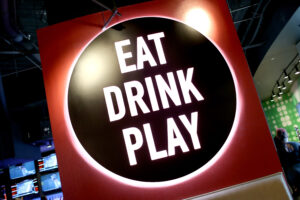 HOLLYWOOD, CA – AUGUST 21: A general view of the atmosphere at Dave and Buster’s Hollywood & Highland Grand Opening on August 21, 2014, in Hollywood, California. (Photo by Mark Davis/Getty Images for Dave and Buster’s)

Dave and Buster’s, the popular adult arcade and restaurant franchise, is making news this week after reportedly serving up too much fun.

Last week, a Massachusetts location temporarily lost its liquor license after officials said the bartender over-served a group 27 drinks in an hour-and-a-half. This resulted in two men being placed in protective custody, one of whom had a blood alcohol content of .19 more than five hours later.

According to the Patriot Ledger, a Braintree police officer Brendan McLaughlin, the board’s licensing agent, was working a paid detail at the Dave and Buster’s on March 5 when a customer called his attention to a patron at the bar who appeared to be drunk. The customer was seen nearly falling over by McLaughlin, who investigated and witnessed a second member of the group attempt to help and was equally inebriated.

The police officer said one of the men turned down a shot of liquor, and the bartender set it aside and served it to him later, and one of the men in the party did not have identification on him.

The bartender was fired after the incident, and the restaurant chain’s lawyer, Albert DeNapoli, stated that “We failed to follow policies that were in place.”

However, Police Chief Mark Dubois, a member of the license board, said blame could not be placed on a single individual since the managers on duty did not prevent the incident.

Dave and Buster'sLaw and Crime