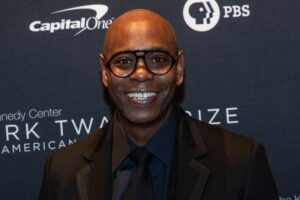 U.S. comedian Dave Chappelle and recipient of the Mark Twain Award for American Humor arrives at the Kennedy Center for award ceremony on Oct. 27, 2019, in Washington, D.C. (Photo by Alex Edelman / AFP) (Photo by ALEX EDELMAN/AFP via Getty Images)

Dave Chappelle, known for his comedy, acting and outspoken nature, expressed his thoughts on Napa Valley’s lack of diversity during the Blue Note Jazz Festival, which he performed in.

On Sunday night, Chappelle, who was MCing the event, took the stage at the BottleRock festival. However, the evening was cut short when the festival’s audio speakers were turned off due to a 10 p.m. noise curfew in St. Helena, California, before musician Robert Glasper could return to the stage.

Outraged by the situation, Chappelle, according to The Drinks Business, began screaming at crew members to turn the sound back on and compared the situation to Martin Luther King Jr., asking what would happen if King wanted to give his “I Have a Dream Speech,” and the crew wouldn’t turn his microphone on. Guests at the festival recalled Chappelle threatening to boycott Napa Valley wine and never return. We’ll have to see whether he will follow through on this threat.

The San Francisco Chronicle reported that Chapelle said he would never drink wine from Napa Valley, referencing the area’s of lack of diversity.

“I’ll never drink a cup of wine from this dusty ass field,” he said. “I’ll drink Italian wines and French wines and South African wines. You cannot shut down Robert Glasper, ever. Let that be known.”

Chappelle also called the festival “the Blackest weekend [Napa] has ever seen.”

Eventually, some other musicians joined Chappelle for a low-key jam, temporarily appeasing the comedian. “Guess what everybody? We just made history,” he said.

Dave Chappelle has a history of speaking out about social issues. He has been an eloquent voice about race relations in America many times. Therefore, his comments about Napa Valley’s lack of diversity should perhaps not be taken lightly.