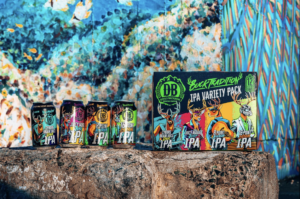 Get a tattoo designed by Jake Karamol, win a year of free beer. Image via Devil’s Backbone Brewing Company

Devil’s Backbone Brewing in Virginia has teamed up with tattoo artist Jake Karamol, who has become a TikTok phenomenon with more than 2 million followers, to offer one lucky “superfan” the opportunity to win one year of IPAs from the Devil’s Backbone Buck Tradition family.

But like any amazing offer, there’s a catch; to win the “Buck Tradition Tattoo Challenge,” you have to get a “Buck Tradition” tattoo designed by Karamol himself.

Contestants may choose from one of three tattoo designs based on the IPA’s branding and can go to Karamol to get tatted up or to another tattoo artist of their choosing. Of course, contestants have to be 21 and older to participate. The Buck Tradition Challenge is open to legal residents of the United States and the District of Columbia (excluding residents of Alabama, California and Texas).

The first 100 people to get their tattoo and verify it by posting it on social media, will get a $480 gift card (about $9/week for a year).

If this sounds like a crazy enough reason for you to get a funky deer tattooed on yourself forever, head over to the Devil’s Backbone website to view the official rules — and book your tattoo appointment before it’s too late.